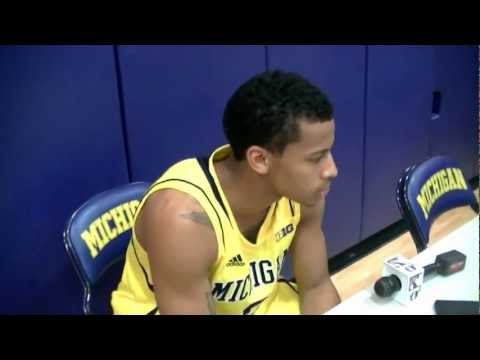 Trey Burke is coming off a breakout freshman season in which he emerge as one of the best point guards in the Big Ten, if not the country. Today at Media Day, Burke talked about his new role as a leader, what he learned from Chris Paul this summer and much more. You can watch Burke in the embedded media player below or read the full transcript after the jump.

On who he sees as a ballhandler besides he and Spike:

I see Tim being another ballhandler. Obviously Nik Stauskas. Besides that, I think Glenn can handle the ball to a certain point. We’ll see as the year goes on, but I think we have more options as the year goes on as far as people handling the ball.

On the effect of most of those guys being young:

Right now, it’s too early, but I think they’ll definitely be ready. They’re coming out of their shell more. They need to learn the offense at a fast pace. I think I’m comfortable with it, I know coach Beilein’s comfortable with it, so we just need to make sure they’re confident that they can get the job done. I don’t have any doubt that they’ll be able to.

On how much the NCAA Tournament loss fuels the team:

We’re honestly over that now. We think about it. Well talk about a play in the game or something like that. I think it definitely has fueled us. I think we’re already motivated by a lot of things besides the loss, but like I said we’ve moved past that, we’re ready to get practice started for this new year. That was obviously a devastating loss but we’re over it and we’re ready to move forward.

On what that does to keep the team from getting high on itself:

That’s another thing I like about this team. All the preseason accolades and awards, we’re not getting caught up in that. We have grounded and humble players, so that’s a good sign. I think that’ll help us out and keep us grounded when we have our highs during the season and when we have our lows.

On what the NBA camps did for his game:

It helped me be more of a vocal leader. I realized how much they stressed how important it is for a point guard to be vocal and to lead his team. I think I learned a lot from that camp (Chris Paul’s camp). I was able to see a lot of other top talent around me and pick up on some other guards’ games. I didn’t go to the camp just thinking, ‘I’m not trying to learn from anybody,’ I was trying to pick up certain things from them and I’m sure Tim did the same thing.

On the camps he went to:

On which camp he picked up the most from:

On if there was someone in particular he picked up something from:

I picked up a lot from Chris Paul, obviously. I picked up from other guards; C.J. McCollum, I like his game. Isaiah Canaan. Phillip Pressey was impressive to me. Guys like that were impressive. Like I said, every single guard who was there was a guard you could have picked up something from. It was a good experience.

On how he stacked up with the other guards:

On how exciting all the new talent is for a point guard:

That’s another reason I feel like we’re going to do well this year. Like I said, I’m coming into a more natural leadership role and all the guys are willing to listen and willing to learn, so with that combination nothing but good will come of it.

On what he’s done acclimate the freshmen:

Just allowing them to play their game. In the open gyms that we have, they were more, like, open gyms where the coaches weren’t there. It was just us playing against each other. If they miss a shot, I tell them to keep shooting and try to give them more confidence and stuff like that. Like I said, they’re picking up a lot of things real fast. That’s a great sign.