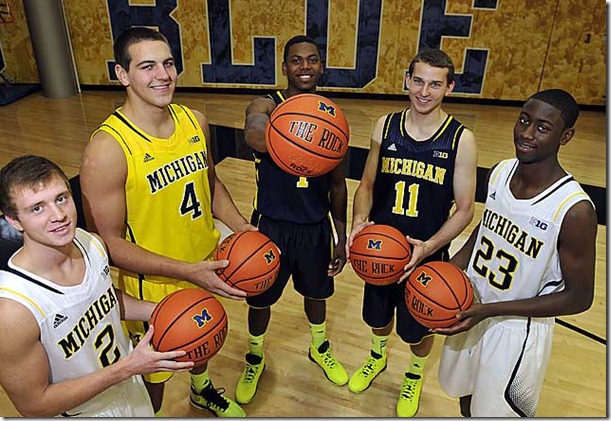 Much was talked about during Media Day as Michigan prepares for its 2012-13 basketball season. Michigan coach John Beilein got the day started with a press conference before players were made available in the Player Development Center. Here are five takeaways from the unofficial start of Michigan’s season.

The five freshmen getting ready to start their first season with Michigan make up the most heralded classes in the program’s recent history. According to the upperclassmen, they have fit in well on the court and are learning quickly through open gyms and the few practices the team has held this fall.

However, both Nik Stauskas and Mitch McGary highlighted one area of the college game that has been surprisingly tough to adjust to: defense.

When asked which part of the transition on the court has been hardest to make, McGary’s answer was immediate.

The upperclassmen have been working with McGary to make sure he knows where he needs to be in various defensive sets. Many Michigan fans are as excited about what the 6-11 freshman will contribute on that end of the floor as what he can contribute offensively.

Stauskas said defense is his main focus of improvement leading up to the offseason.

“Just defensively, getting stronger and faster. I think that’s something coach Beilein preaches a lot is good team defense,” Stauskas said. “So that’s something I definitely need to work on.”

For what it’s worth, Michigan assistant Lavall Jordan said he thought all of the freshmen were coming along defensively.

“I think they’re doing great. They’re coachable, they’ve got great attitudes and they want to be good,” Jordan said. “Coach Beilein has emphasized the defensive end of the floor, so in the fall it’s been a lot of defensive techniques and concepts.”

Josh Bartelstein instrumental in helping the freshmen acclimate to Michigan

Michigan’s five incoming freshmen, at least three of which are expected to contribute immediately, are attempting to adjust not to life as a Division I basketball player but life as a college student. While all of the upperclassmen have been doing their part to facilitate this transition, one seems to have gone above and beyond: senior Josh Bartelstein.

“Josh (Bartelstein) has done a really good job with that,” McGary said. “I mean, he took me under his wing off the court and on the court. I hang out at his house all the time now, just kick it, playing XBox with the guys.”

Bartelstein lived in the same house as the departed Zack Novak last season and picked up many of the leadership habits of the former Michigan standout. He has used a lot of what he learned from Novak to help out the newcomers in the classroom and on the court.

For his part, Bartelstein said he remembers what it was like when he was a freshman and just wants to do what he can to help this class get through it.

“I remember when I was a freshman. Your head is spinning, everyone is pulling you and your eyes are wide open,” Bartelstein said. “I’m just trying to kind of get to know them each individually. Everyone is different and there’s different things that they are worried about.”

The high expectations for the 2012-13 Wolverines were one of the top talking points on the day. Debates have raged on throughout the offseason as to where the Wolverines should rank but many have Michigan slotted as a top-5 team before the season. The preseason hype is consistent as the Wolverines are ranked 3rd by Lindy’s Magazine, 5th by Blue Ribbon and 6th by Athlon Sports.

The Wolverines themselves, try to block out all the noise associated with such rankings. However, the hype surrounding this season is undeniable.

One of the undisputed leaders of this young team, sophomore point guard Trey Burke, isn’t concerned about the team letting the hype get to them.

“All the preseason accolades and awards, we’re not getting caught up in that. We have grounded and humble players, so that’s a good sign,” Burke said. “I think that’ll help us out and keep us grounded when we have our highs during the season and when we have our lows.”

It’s up to the upperclassmen to set the tone for the freshmen when it comes to worrying about rankings, and it appears the young players have received the memo.

“(The team’s preseason rank) kind of goes back to my personal rankings or whatever. I really don’t even look at that part,” Glenn Robinson III said. “I see it as ok we need to get better in this area or that area. We need to get better as a whole team so I don’t pay attention to rankings.”

There has been a lively debate this off season as to which position Tim Hardaway Jr. will play this season. The answer given at media day was definitively vague: both.

John Beilein stressed the development of Hardaway’s overall game and what he’s been working on specifically to improve.

“First of all, doing more than just being a shooter, working on other parts like scoring, rebounding, things like that,” Beilein said. “Keeping his composure through thick and thin, depending on what it is.”

When asked specifically what position Hardaway would play, Beilein refused to take a stance.

“I think both [positions]. We like him in both,” Beilein said. “He is obviously very natural as the three man and he knows what he is doing over there. It is where we get people most comfortable. But right now we like that he is versatile enough to play both, he enjoys both and he is so driven he can accomplish anything he wants to.”

Hardaway himself sees the possible move from playing mostly the three spot to the two as a non-issue and stressed that he’s willing to play wherever the team needs him.

Beilein said he doesn’t have any definitive lineup set, and joked that when he does the media will still not know about it until the team plays its first game.

Embarrassment of riches at four and five positions

In previous years, you could hear an audible groan from the crowd at the Crisler Crisler when Jordan Morgan would pick up his second foul in the first half of a game. There just wasn’t much depth at his position behind him, and the Wolverines often had to scramble to fill the role if he had to be taken out.

The 6-foot-4 Zack Novak played significant minutes at the four position. Evan Smotrycz, known more for his three point shot than interior prowess, played significant time at the five. Even Colton Christian and Matt Vogrich would spend time in the front court. Michigan had to be creative because really it had just one primary option.

Now, it’s a different story. Michigan has depth at the four and five positions previously unknown under Beilein, and the coach is finding some relief in that.

“When Jon [Horford] got hurt I didn’t feel like we ever had a choice last year. We weren’t developed that much the year before, and what we were doing was working as well as we thought we could do,” Beilein said. “I like having that option. Who knows how this will play out really.”

Another way the depth helps is how it opens up different options offensively for the post. Red-shirt junior Jordan Morgan sees that as the aspect all the incoming big men to be most excited about.

“I think it gives us a little versatility. We can do different things on offense,” Morgan said. “It gives us a lot of size, length, and rebounding ability on the defensive end. It gives us the ability to play with different looks, and a lot of depth, too.”

Michigan also enters the season healthy. John Beilein reported that the only injury of note was a foot stress issue for Corey Person and that “everybody is pretty much back” healthy. Wolverine big man Jon Horford was forced to red-shirt last season after a nagging foot stress fracture issue cut his year short.