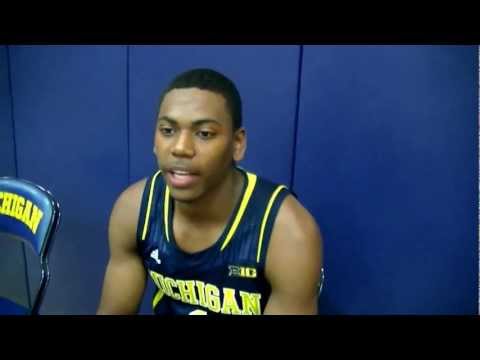 Glenn Robinson III addressed the media on Wednesday afternoon at Michigan’s Media Day, discussing his relationship with both incoming players and his more experienced teammates as well as how he feels about Michigan’s preseason hype. Watch Robinson’s interview in the embedded media player below or read a full transcript after the jump.


On what position he’ll play:
”I’m not sure yet. I don’t know where I’ll be playing but, like I said, throughout high school I played anywhere from the two, three or the four. I’d get a rebound and dribble it up the court. We just have to stay together as a team and I’m not sure what I’ll be playing this year so far. We’ll see when that time comes.”

On Mitch McGary and his relationship:
“Mitch is a very good player and an even better kid off the court, a lot of people don’t know that. Mitch is very energetic, he brings that energy and life that we need on and off the court. Just fitting in, he’s great. We all fit in, all five freshmen. Together I think we can do something special.”

On Mitch McGary’s defense:
“He’s getting a lot better at defense. Even on offense you’ll see him, energy wise he’s running up and down the court. That’s a big part of his game and getting past the big men. Playing the four and him running the floor is going to help him a lot.”

On how much easier Trey Burke makes the game for him
“He makes the game so much easier. I’ll just be running my lane and he’ll just toss it up and I might get a nice dunk out of it. He just makes everything so easy. He’s a great leader too, even off of the court. Some of the things that he’s been through he’s brought to me, to Mitch, all of the freshmen so we can get past that stage a little bit. I respect that from him and that’s great leadership from him in that part.”

On lineups:
“We haven’t seen anything on lineups. We start practice on Friday so from here on out we’ll start seeing some of that.”

On all of the talent combined between classes:
“I think all of us as a team we all have played a little bit emotionally in that system before. Especially as five freshmen coming in, we’ll need a little bit of that. Trey and Tim make the game so much easier by explaining things in practice or open gyms. Explaining what to do better or what coach Beilein expects.”

On a nick name for the freshman class:
“Not that I know of. People call us the next Fab Five or the Fresh Five but we don’t have a nickname for ourselves. We’re just trying to come in and do what we can to help the team.”

On what he needs to improve:
“I think definitely defense. Defense is the key. Everyone says defense wins championships and it really does so for me and the whole team we need to keep working on our defense.”

On the team’s high ranking:
“That kind of goes back to my personal rankings or whatever. I really don’t even look at that part. I see it as ok we need to get better in this area or that area. We need to get better as a whole team so I don’t pay attention to rankings. “