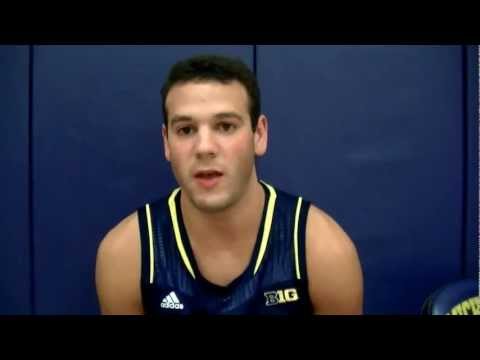 When Josh Bartelstein hasn’t been blogging, he’s also been serving as a mentor for Michigan’s freshmen class. The senior guard took the time to discuss the freshmen and how they’ve fit into the Michigan culture at Michigan’s media day on Wednedsay afternoon. Watch Bartelstein’s interview below or find a complete transcript after the jump.


On life without Zack Novak:
“Mostly in my house, not blasting music every morning or doing something crazy. Just someone that’s always talking and having a great perspective on things. I still talk to him all of the time, I talked to him this morning, last night, but at the same time it’s part of college basketball.”

On what he’s done to help the freshmen:
“I remember when I was a freshman. Your head is spinning, everyone is pulling you and your eyes are wide open. I’m just trying to kind of get to know them each individually. Everyone is different and there’s different things that they are worried about. Just talk to them all at the same time and at the same time individually. They’ve all done a great job picking up on culture and our program.”

On the freshmen learning to defend:
“What I try to tell them is that we want to get out and run and dunk and the only way to run and dunk is to get stops and rebounds. They’ve bought in and when you buy in it makes it easy to teach it. Defense isn’t easy, it’s not just getting in a stance… it’s about getting through screens and getting in the gap and help defense. That’s something we’re focused on and they keep picking up. [Playing defense] is how we’re going to be really good, the offense will take care of itself.”

On depth:
“I think it’s great. When you have depth there are a couple of things. One, you are harder to scout and teams can’t lock in on specific people. Two, it makes practice every day great. When you have 10 guys, 12 guys, really we have 15 really quality players fighting for minutes. You can’t take a day off in practice or you’ll get passed up. Get better every day and when you’re making yourself better and making the team better.”

On transferring Zack’s leadership and influence:
“We kind of started here with “This is Michigan”. That’s kind of Brady Hoke’s quote but it fits in perfectly. We’ve have Juwan Howard, Glen Rice and you have to fit into this culture. It’s a great culture, we do things the right way and  we play our tails off. At the same time if you find yourself outside of that culture, who are you? When Juwan Howard did it and Zack Novak and Stu Douglass. You are just kind of a speck on the whole block M. Don’t be the guy that’s too cool or isn’t a Michigan Man. When they understand that it makes it easier.”

On whether it surprised him how accepting the freshmen were of that culture:
“It’s the coolest thing so far is that you have five stars who were highly recruited and they came in all thinking about the same things. We were thinking they might have egos but they were the exact opposite. When they do that, it makes it easy to help them.”