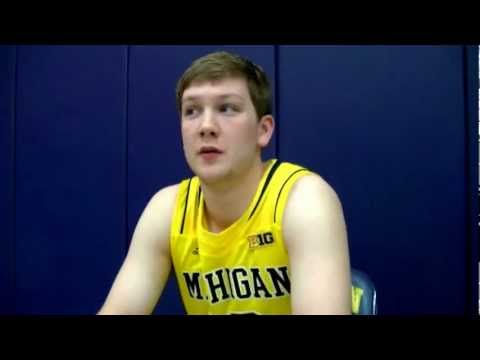 Matt Vogrich is the only Michigan senior on scholarship and discussed the void (or lack thereof) left by Zack Novak and Stu Douglass’s departures, what he’s seen out of the freshmen and more. You can watch Vogrich in the embedded media player below or read the full transcript after the jump.


On whether or not he’s altered his shot after last year’s struggles:

I’m not touching my shot, but just getting more reps, and being ready to go if you’re in the game. If you miss a few, just reminding yourself that this has happened before, you’re a great shooter and you’re going to knock the next one down. But it’s about getting through it and learning from the experience.

On what he’s seen so far this summer:

We’ve had really talented teams all four years. What makes a tournament team a tournament team has a lot to do with individuals, fundamentals and leadership. I think we’ve got a unified team and we’ll see what we can do.

On his role in acclimating the freshmen to Michigan:

We’ve all been doing a great job. A lot of the seniors have been around here for four years. We know the culture here. Coach Beilein expects that out of us. We just try to help them. All ten of us. If we see anything we feel we should chime in on with these guys, all ten of us are willing to go talk to them and kind of put an arm around their shoulder and help them through it. It’s been a great team leadership type of experience so far.

On if it’s set in that he’s a senior:

Not really. It’s crazy. I’m old and I don’t like it. I’m excited and I’m ready to have one last ride, it’s my last year, I have two feet in and we’ll see what happens.

On how his game has changed since his freshman year:

I learned a lot from Novak. I’ve been working a lot on my handles so I can get to the rim if need be, shot fakes, getting the lane to maybe create for others. I’m just doing a lot of things to help coach Beilein. Whatever he wants, whatever’s best for the team, I’m going to try to do.

On changes in the atmosphere without Zack and Stu around:

Not really. We’ve learned a lot from them. All ten of us coming back learned a ton from those guys. They talked to the freshmen, too, so I’m sure the freshmen learned a lot as well. They’ve kind of instilled us with all the stuff they’ve taught us and we haven’t missed them too much.

On what excites him about the freshmen:

What excited me most about these guys is just the team-first attitude they come in with. They’re a really heralded class and you can see a lot of egos maybe getting in the way, but with these guys it’s not like that. They’re community-first, Michigan basketball-first, team-first kinds of guys and that’s what excites me most about the five of them.

On how he sees his role has changed:

On how they’ve tempered expectations:

I think we’re ding a great job. We’re not trying to press, we’re not trying to look at predictions or hat sort of thing. We’re just trying to get better every day, maximize our potential and talent and just come together as a team. The most talented team is not necessarily going to win a national championship every year. It has to do with the most unified team, the team that executes the fundamentals and the intangibles. We’re trying to develop all those things.

I’ve moved around for three years, so I’m pretty comfortable doing that. I’ve even played the four sometimes when Zack was in foul trouble, so I’m used to playing all over. I know coach Beilein’s offense pretty well. I think we’re all going to be pretty comfortable moving around based on the team we’re playing and match-ups.