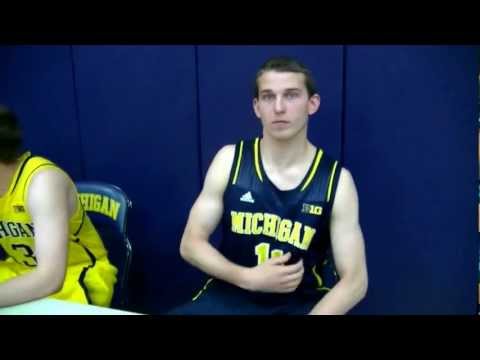 Freshman Nik Stauskas was available to talk to the media on Wednesday afternoon at Michigan’s annual Media day. The 6-foot-6 freshman discussed how the team is managing expectations, the importance of the upperclassmen in the transition to the college game and more. You can watch Stauskas is the embedded media player below or read the full transcript after the jump.


On how tight the freshmen are as a group:

We spend a lot of time together, whether it’s in the dorms, study hall, or in here just shooting around. So, we’ve definitely gotten to know each other quite well. And Mitch, Glenn and Spike have all known each other since AAU, so they already had a good relationship coming in.

On how he’s fit in with that group:

They’re super welcoming to me and Caris, so we haven’t had any problems.

On what he needs to improve before the season:

On the versatility of the team:

On how he sees his role on the team:

Whatever coach Beilein needs me to do. Whether that’s knocking down shots or putting the ball on the floor and creating for my teammates, I’m confident in my offensive abilities, but I’ll do whatever they need me to do to win games.

On how the upperclassmen have help him transition to the college game:

It’s just little things when we’re practicing. Say one of us messes up, one of he veterans will just pull us aside real wuick and tell us what we were supposed to do. Just little things like that to help us get into the flow of things.

On his personal expectations:

I’m not really sure. I expect myself to work hard and do everything I can to play well. I think every player wants to get in the rotation — that’s everyone’s goal. But at the end of the day I just want to get better, That’s my expectation.

On the competitiveness of the practices:

They’re pretty competitive. Even our open gyms when we just play 5-on-5, one team wins one game and things get going real quick and guys start to get fired up. We’ve got a lot of competitive people here.

On who he likes matching up with in practice:

On if there’s been any shooting competitions:

We have not had any shooting competitions yet, but we have had the fifty and five, which is the only thing that kind of compares us in shooting.

On who’s taken him under their wing:

On the high expectations for this team:

We’ve all heard about the expectations. We’re just coming in here every day, working hard and listening. I think that’s one of the key things. Listening to whatever coach Beilein has to say because ultimately he’s going to make decisions and he knows what’s best.

On the ball-screen offense:

We’ve just kind of gotten started on it. Obviously there are a ton of options off of just one player, so it’s going to take time for us freshmen to get used to it. But as long as we work hard and stay focused it won’t be a problem.