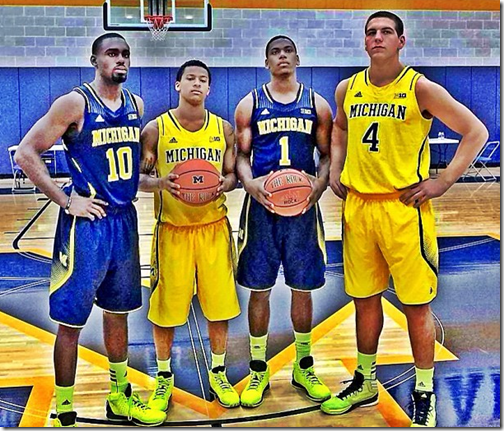 Michigan’s Media Day took place on Wednesday afternoon and practice begins today meaning college basketball season is officially here. The last 48 hours or so have filled the internet with discussion of Michigan basketball and a number of fairly vanilla early season quotes. We’ve posted our fair share of content over the last two days but here’s a recap of what we’ve posted as well as some of the best articles, videos, photo  galleries and columns around the internet.

Baumgardner also broke down the roster player-by-player before Wednesday’s events.

Trey Burke gained 15 pounds but says the greatest difference this year will be him “letting the team hear [his] voice”. John Niyo looks at Burke’s decision to return and his attitude going into this season at the Detroit News. (Photo: Detroit News)

Nik Stauskas thinks that “it’s perfectly normal to say Mitch is crazy” and Mark Snyder talks with the freshmen about beating the upperclassmen in an early open gym.

MGoBlue has a feature video with Michigan players from the event:

iSportsWeb asked the team which of Michigan’s big guys is most likely to break a backboard first. Corey Person thinks multiple backboards could be destroyed but McGary fears the improved basket quality but did eventually pick himself.

Mike Rothstein touches on expectations and the freshmen class at Wolverine Nation. MGoBlog’s Ace Anbender has requisite nuggets from Beilein’s presser but more importantly a close look at the shoes Michigan was wearing:

Whether Michigan wears the neon shoes in a game remains to be seen but there’s no denying neon shoes are all the rage on the basketball court lately.

Ticket Updates. Looking to attend Michigan home games? The Wolverines are selling a number of ticket packs beginning next week. We are also passing along a discount on tickets at the Brooklyn Hoops Festival, where Michigan will play West Virginia on December 15th at the Barclays Center. The coupon code BKHOOPSWF will get you anywhere from $5-$15 off of your seats here.