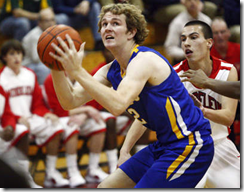 Evan Boudreaux, a 6-foot-7 class of 2015 forward, visited Michigan on Saturday for the football game against Illinois. Boudreaux has already taken quite a few visits this fall, and he enjoyed his stay with the Wolverines. We caught up with Boudreaux on Sunday to get his reaction to his Ann Arbor experience.

What did you do on the visit?
We got in Friday night. We got on campus and coach Jordan told us to call him. We went over and we checked out the facilities and I got to meet the team and all the coaches, which was really cool. We were all joking around and talking and it was a really great night. On Saturday, I got to campus with my parents and we watched practice for about 30 minutes or 45 minutes. Then we toured the campus and we saw the academic centers and we went to visit the dorms, and I got to see what Michigan was like on gameday, which was exciting. After that, we came back and watched the end of practice. We went to a tailgate for the football game with some other recruits and a bunch of coaches and all the players. After that, we headed over to watch Michigan play Illinois.

What was your impression when you met the team on Friday?

They were great. Matt Vogrich went to my high school, I talked to him a lot Friday and Saturday. And then all the other guys, they seemed really cool. They were talking to me the whole time. They really sang Michigan’s praises, and they seemed really genuine about it. I really thought that those guys were really the kinds of guys I would like to play with, so that was good.

What did you think of the atmosphere at the game?

It was crazy. We got to go on the field before the game, and standing next to those guys is pretty amazing. We were on the 40 or the 30 yard line on Michigan’s sideline and watching the game with the other recruits, and coach Beilein was really cool. I sat next to coach Beilein for a while and talked with him. It was just overall a great experience.

What did you talk to the coaches about?

Coach Beilein was talking about how he really liked me as a player, and he watched my open gym and he was really excited about me. He said we’re going to do some serious talking after this year, after my sophomore year. But he said he’s really looking forward to watching me play. I talked with coach Alexander for a while, and he was a really fun guy to be around. I really think they have a great coaching staff over there.

What other visits have you taken so far?

How would you compare your visit to Michigan with the others you’ve taken?

Overall, what do you like about Michigan after your visit?

I really connected with the coaching staff. I really had a great time talking with them, as well as Michigan and everything Michigan represents. I got a great tour of the academic facilities at Michigan and they were really top-of-the-line. And I think Michigan’s style of play really fits me well. As I watched in practice, they really let their big guys do a little bit of everything in terms of handling the ball and shooting. That really stood out to me.