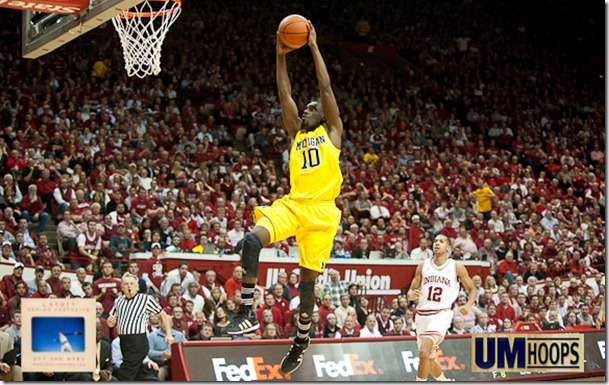 The 2012-13 USA Today Preseason Coaches Poll was unveiled on Wednesday afternoon and featured five ranked Big Ten teams, three in the top five slots. Preseason rankings are little more than a vague guideline for expectations – although the preseason AP poll has surprising predictive power – but they are great for starting discussions and looking ahead to the season. We go team-by-team through the Big Ten’s ranked teams (and one buy low candidate that’s not) and rate each school with a buy-or-sell grade.

The only direction Indiana can go is downward, so it would be silly to buy them on the top, but I’m convinced of Indiana’s No. 1 preseason ranking. The Hoosiers had a truly elite offense last season and return every component of note, along with a top five recruiting class. I’ll be the first to admit Indiana doesn’t play great defense, and there will be bumps along the road, but add in one of the nation’s top home court advantages and it’s tough to move anyone else ahead of the Hoosiers. Louisville sits in the two spot but was actually worse offensively than Indiana was defensively.

Deshaun Thomas and Aaron Craft are one of the best two-man duos in the country but their supporting cast has a lot to prove. The top four ranking seems lofty for a team that loses nearly half of its offensive production last season in Jared Sullinger and William Buford. Slotting Ohio State this high means that a couple of players from the unproven group of Evan Ravenel, Lenzelle Smith, Shannon Scott, Sam Thompson, Amir Williams and LaQuinton Ross will have to make major improvements. There are plenty of highly regarded players in that group but they haven’t quite proven themselves at this level. We’ve seen it before at Ohio State (the Buckeyes have won the last three Big Ten titles) but there are plenty of question marks.

I fully believe that this could be the best team that John Beilein has ever coached; I also can’t endorse Michigan as a top five team before November. There are just too many questions, even if there are viable answers, to anoint the Wolverines this early. Michigan loses leadership and will have to call on freshmen for critical roles early and often. Trey Burke is great and Tim Hardaway Jr. seems ready for a big season but the Wolverines would seem to be a lot better fit around the 11 or 12 spot in the rankings.

Draymond Green meant everything to Michigan State as a program both on the stat sheet and in the locker room (newly elected captains Derrick Nix and Russell Byrd would be lucky to replace half of Green’s leadership) but Tom Izzo still has a talented group. The 2010-11 aberration aside, last year’s Michigan State team played the sort of basketball we expect to see in East Lansing. Reports are encouraging about Branden Dawson’s knee recovery, Keith Appling should be due for a bounce back year and Derrick Nix and Adreian Payne both made dramatic improvements last year. Throw Gary Harris in the mix, a player that Izzo is praising for his offense and defense, and you might have something special in East Lansing.

Sooner or later, we have to stop underestimating Bo Ryan. The Badgers are a model of consistency in Madison and, even without Jordan Taylor, it seems crazy to imagine them anywhere else but the top third of the Big Ten standings when the season plays out. Wisconsin returns five critical rotation players (Jared Berggren, Ryan Evans, Mike Bruesewitz, Ben Brust and Josh Gasser) and brings in five star forward Sam Dekker. Point guard is an issue without Jordan Taylor, but this is a program that knows how to manufacture wins in the Big Ten.

You might not get rich betting on Wisconsin but the Badgers will give you a fairly steady return on a yearly basis.

I want to believe in Minnesota, I really do. However, the Gophers seem to be stuck in an infinite loop of mediocrity under Tubby Smith. The ceiling for Smith since arriving in Minneapolis has been 9-9 with a double digit tournament seed but in each of the last two seasons the bottom has fallen out en route to a 6-12 conference record. Trevor Mbakwe is one of the league’s best but he also has pending legal issues and is recovering from knee surgery. Maybe this is the year Minnesota breaks through but I’m not betting on it until the Gopher guards can prove themselves.

If you are looking to buy low on a Big Ten team ready to break out then you should go with the Hawkeyes. Iowa won five games in the final month of the Big Ten season to scrape out an 8-10 conference record and the young nucleus of Devyn Marble, Aaron White and Zach McCabe should be able to hold its own in this conference. Add in two top-100 recruits at positions of need – Mike Gesell at point guard and Adam Woodbury in the post – and suddenly Iowa looks like a potential NCAA tournament team.