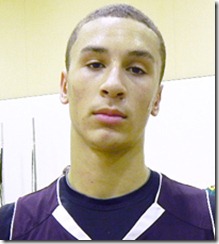 Williams is a 6-foot-5 wing guard that had a strong summer with Urban DFW. Williams already holds an Iowa State offer and also visited Texas A&M this fall. He had a strong performance at the Adidas Invitational this summer in Indianapolis and caught Rivals.com’s Corey Albertson’s eye at that event:

Williams is a shifty slasher who loves to compete against high-level competition. The Urban DFW wing was able to score the ball prolifically in a win over Eric Gordon All Stars on Friday by constantly looking to be aggressive with his dribble, and using his superior size for a rising sophomore guard to rise over defenders. Williams showed signs of having a mature mid-range jumper, but was more aggressive playing off the wing and attacking the basket with straight-line drives to the rim. He’s a good athlete who can play a variety of positions at 6-foot-5, and is willing to use his size to his advantage on the defensive end.

Williams’s visit to Ann Arbor is expected to extend throughout Friday and Saturday as he attends the Michigan-Michigan State game on Saturday afternoon. Michigan’s class of 2015 recruiting board continues to grow and the Wolverine staff has targeted quality prospects around the country, slowly expanding from their midwestern base.

2013 commitments Derrick Walton and Zak Irvin are both expected to take their Michigan official visits this weekend for the Michigan State game.

Both Michigan commitments tweeted their excitement about the upcoming trip and should serve as helpful recruiters for Michigan’s other targets on campus.

Me and my mans @zirvin21 gone be in Ann Arbor this weekend.. Don’t be shy to speak!! Show us some love!

Michigan’s three-man class of 2013 can officially sign letters of intent next month with the early signing period running from November 14th through 21st.

Rivals.com unveiled its initial listing of four and five stars in the class of 2015 on Thursday afternoon and several Michigan targets were featured. Karl Towns and Diamond Stone both earned five star distinction while Jordan Ash, Jalen Coleman, Hyron Edwards, Eric Davis, Trevor Manuel, Stephen Zimmerman were among the four-stars.

Ash, Edwards and Manuel have all visited Ann Arbor while Stone is expected on campus this weekend.

This was discussed in our buy-or-sell feature but several national pundits feel that Michigan is overrated in USAToday’s Coaches Poll. The USA Today’s Dan Wolken and Basketball Prospectus’ John Gasaway both tweeted their disagreement with Michigan’s early ranking.

All in all not a bad preseason 25, coaches. But flip Michigan and Michigan State. is.gd/vvHmVy

I like Michigan’s team, but No. 5? One of most overrated teams ever.

I think it’s hard to deny that Michigan is at least a bit overrated but “the most overrated ever”, well that’s taking it too far. Nathan Walker (@bbstats) tweeted a weighted average of early preseason measures (the coaches poll, Luke Winn’s Power Rankings and Vegas odds) to create a composite early ranking which seems a bit more fair. Michigan slides to 7th and appears fairly equal to Duke, NC State and Michigan State.