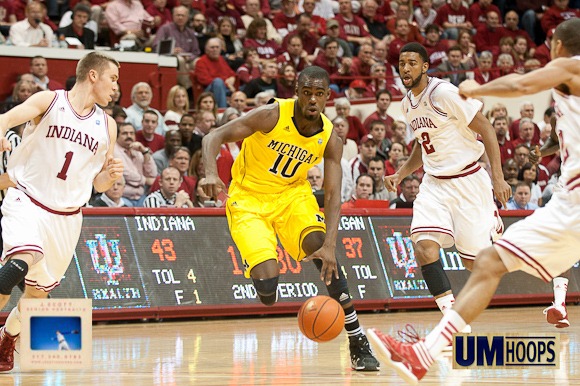 Characterizing Tim Hardaway Jr.’s sophomore year as a “slump” might be a bit of an overstatement given that Michigan’s No. 2 scorer tallied more points and assists than his freshman season. However, the underlying statistics behind his raw production are tough to ignore. Look a bit deeper and it’s clear that Hardaway was significantly less efficient as a sophomore and his three point shooting tells the story of his sophomore slump. The junior swingman played more minutes and used a higher percentage of Michigan’s possessions but a steep drop in his three point shooting (37% down to 28%) caused his offensive rating to fall by six points.

Along with point guard Trey Burke, Hardaway will once again be one of the focal points of Michigan’s offense this season. This year is pivotal in Hardaway’s development as he’ll not only be adapting to spending time at a new position (the two guard), he’ll also be attempting to find the consistency which he lacked throughout last season.

The first step for John Beilein is figuring out where Tim Hardaway Jr. fits in on the 2012-13 roster: at the two guard or the wing? Hardaway made it clear that he’s more than willing to play the two, and probably wants to for NBA purposes, but expect him to spend time at both positions.

The wing has historically been a shot creating position in John Beilein’s offense. Two of the best three’s in John Beilein’s system were Mike Gansey and Manny Harris,  all-around players that could slash, shoot, score and were the top players on their respective teams. Playing the three allows Hardaway to create his own offense slashing to the basket, coming off of curls for mid-range jump shots or using a ball screen. He has the ability to be successful in these situations and many will come more naturally at the three than the two.

If Hardaway is going to play significant minutes at the two, he’s going to need to prove that he can be Michigan’s secondary ball handler on a consistent basis. The two position is much more similar to the point guard role than a slashing role. Remember that John Beilein’s two guard offense was originally created to have two guards facilitating the offense to compensate for not having a true point guard. To date, Hardaway hasn’t shown the consistent handling or passing ability to make him a great fit for this spot.

Without Stu Douglass and Zack Novak, Michigan needs a two guard. It’s fair to say that it’s an open audition for the spot and John Beilein will have to mix-and-match everyone under 6-foot-7 other than Trey Burke between the two guard and the wing to find the best combinations. Hardaway should get his fair shot at both spots.

This is an extremely important year for Hardaway. He can prove that last year was a fluky setback in his overall development as a complete scorer, or that he’s a streaky player who lets his emotions get in the way of his production. His consistency will not only affect his draft stock, it will greatly affect how many games Michigan wins. Michigan brings in a great collection of talent, but isn’t going to take a big step forward unless Hardaway takes a big step forward.

To be blunt, the evidence shows that Hardaway is a streaky shooter more than a consistently elite shooter.

Could he explode to be a 35%+ shooter as a junior? Possibly but he’s only shot that well for two months of his two year career and the signs point toward him being much closer to a 30 percent shooter than anything else.

One way or another, Hardaway’s baseline production should be right around 15 points per game once again this season. If he’s truly improved, he’ll be able to score those points in a significantly more efficient manner. Hardaway played well at various summer camp events this offseason, he’s saying all of the right things and he looks ready to go and has added muscle.

Hardaway has the ability to be a game changer at the highest level. He’s proven that much and if he’ll be one of the league’s best players if he can find consistency. I would expect a strong start to the season as he looks to get off on the right note but the true test will be what happens when he has a couple of bad games in a row. Will he allow two or three poor shooting performances to snow ball into five or six, or will he find the emotional stability necessary to stay on target and bounce back.

He doesn’t have to play superman, like we saw down the stretch in 2010-11, on this year’s Michigan team. There are plenty of pieces around him to pick up the slack. The sooner he realizes that fact, the better off he’ll be as he takes that weight off of his shoulders and is able to just play.