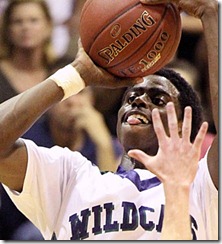 Dwayne Bacon is one of the more versatile prospects in the class of 2015. He has a complete arsenal of skills: he can slash, he can dish and his handle is impressive. He’s also 6-foot-6.

That’s a big reason why the Lakeland, Florida native is regarded as a top-50 player early in his recruitment.

In a recent interview with UM Hoops, Bacon said that, despite his ability at the point guard position, he’s working on one thing to get ready for the high school basketball season: shooting.

“I need to shoot it a little better,” Bacon said. It’s one of the few holes in his game, according to those who have seen him play. Scouting reports say the 2015 guard is versatile and crafty, and knows how to get to the rim regardless of who he’s matched up with — at his size, his defender could be anything from a point guard to a power forward.

Bacon’s combination of size, scoring ability and craftiness has gotten him noticed by a number of major conference schools, including Michigan, in recent weeks. Bacon’s primary recruiter at Michigan is Wolverine assistant coach Bacari Alexander.

“I’ve been talking to Bacari Alexander. I’ve talked to him and my AAU coach has talked to him,” Bacon said. “We don’t talk a lot, but he’ll call and my coach will tell me to call him just to check up and all that. My coach was telling me they want me to come out and visit.”

His conversations with Alexander have impressed him and he made it clear that a visit to Michigan is in the works.

“Coach Alexander is a good coach to me in my eyes. He’s a good guy. He makes you feel like he can be there for a player and everything. He tells me how they are, he tells me how they would use me. They tell me they want me, that pretty soon they’re going to want me. I’m looking forward to that.”

Bacon also is familiar with Michigan’s style of play. He has watched a lot of Trey Burke footage, he said, and he likes what he sees Michigan doing offensively.

“They have a fast offense. They play well together. I think it would suit me,” Bacon said. “I just like how they play. A lot of people underestimate them and they’re really a good team. They have a good point guard who can do a lot.”

Michigan will have stiff competition should they continue to pursue the McKeel Academy standout. Bacon already holds offers from Florida State, Baylor, Virginia Tech, UCF and Old Dominion. George Mason, Tennessee, UCLA and Virginia have also been tracking the Florida native while his only visit has been to Florida State.

From the class of 2015, 6-foot-5 guard Dwayne Bacon is going to need close monitoring. He showed potential at the Reebok Breakout Challenge last week and did again Wednesday night. Bacon is a high-level athlete who can attack a bit off the dribble and he didn’t look bad burying spot-up threes from the corner either

And all of this attention has come after Bacon’s first year of national AAU ball. He says he has even higher hopes for next summer.

“I’m looking forward to my second year. This year I plan on getting offers nobody thinks I can get. I plan on being the best player I can be and I’m working on doing that.”