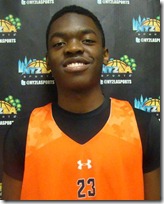 Michigan won’t offer class of 2015 prospects until June 15th, 2013 but the Wolverines have began an aggressive pursuit of a number of talented underclassmen. Michigan has already hosted a number of top prospects on campus for multiple visits and John Beilein and his staff have also made early overtures with an array of top-50 to top-25 prospects.

Michigan has yet to secure any commitments in the class of 2014 which makes it tough to predict a likely class size in 2015. At this point, Michigan is casting a wide net while focusing on talented players across the board regardless of position. Point guards, bigs, wings and combo forwards are all well represented on our first edition of the 2015 recruiting board.

To take a look at Michigan’s recruiting picture, we’ve broken recruits into two groups and sorted them by position. Our target list includes prospects that appear to be slightly higher level targets either because of campus visits or their sheer caliber. The second group is a name to follow, names which might just be a cut below but are still on the radar at this point.

All player names are linked to their UM Hoops recruiting profiles with previous updates, school lists, videos and scouting reports or an archive of content surrounding the player.

If there is a prospect we forgot, please drop us an email at umhoops@gmail.com.