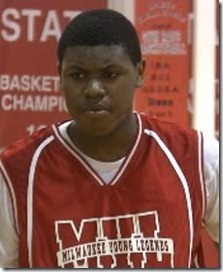 Diamond Stone is currently the No. 2-ranked player in the 2015 class and the Wisconsin native visited Michigan last weekend for the Michigan State football game. The versatile 6-foot-10 big man already is receiving interest from UCLA, Marquette and Wisconsin, among many others. UM Hoops caught up woth Bob Stone, Diamond’s father, for a brief reaction to the visit.

What did you and Diamond do on the visit?

We got there early and then we went to visit the new Davidson Center, which is their new facility just for basketball. We got a tour of the facility and we talked to the trainer and he explained the new technology in the training room. We talked to the strength and conditioning coach and he showed us all the bells and whistles in there. Then we went and watched a practice. We went over to Crisler and they showed us the new improvements, the new expansion they did there. We did everything, but I wish we could have gotten to see more of the rest of the school, but we were on a schedule. When we go next time, if we go back, we’ll get more into the academic part of it. But they have a state-of-the-art facility. After that, we went to the tailgate, and then after that we just went to the game.

What was Diamond’s reaction to the visit?

I can tell you his reaction was that they showed him love, that was his comment, from his mouth. And he seemed to like the coaches. Coach Beilein is very personable, and he liked coach LaVall (Jordan) and coach BA (Bacari Alexander).

What were the coaches talking about?

They talked to him about how important grades were, how important it was to continue on the process they were on. You know, they give you the usual things, talking about the integrity of the program, and things like that.

Are you familiar with Michigan’s style of play?

Me and coach LaVall, we talked about it and we’ve seen it. We watched them practice.

Do you see Diamond fitting into that style?

He’s kind of a versatile kid — he could possibly fit into there. You know, he’s got two more years to grow so hopefully his game will expand. It has possibilities.

Overall, what does Diamond think as far as Michigan’s program?

We didn’t really get into that. We talked about the facilities, and we talked about the difference. This fall, we’ll probably watch a lot of games from Michigan and other schools and we’ll evaluate them as they play. Off that, we’ll try to come up with the school that best fits him.

What did Diamond think of the game day atmosphere?

Can you give me an overview of Diamond’s game?

How do you see Diamond fitting into a pick-and-roll system?

He’s an excellent passer and he’s a willing passer. They run some low-post sets and they run some high-post sets. So by him being a willing and a decent passer, passing with both the left and the right hand, he can open up a lot of shots.

With hard work and sacrifice he can go where he wants to go. He got his skill set early so he has an above-average basketball IQ. He understands why he’s doing what he’s doing and he’s trying to understand how things work together. I think that came from a good foundation of fundamentals. So right now he’s got his fundamentals. At the next stage he’s going to get physical — we’re working on his conditioning, we’re working on adding muscle and his strength. After that, it’s just the creative stage. So, he’s got about two more stages, according to my little blueprint I have, he has two more stages he needs to go through, and this will keep him hungry. I think his ceiling is wherever he wishes to take it.