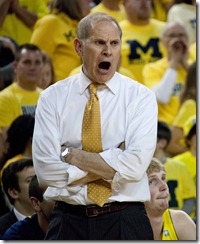 John Beilein addressed the media this morning at the Big Ten Media Day in Chicago, Illinois. Beilein discussed his team, picked to finish second in the league, and the upcoming basketball season.

THE MODERATOR: Next up is Michigan head coach John Beilein, welcoming back 10 letter winners and they won a Big Ten championship last year.
JOHN BEILEIN: Pleasure to be here. Always exciting time when you’ve seen your team for almost two weeks now and then have the opportunity to try to put the puzzle together. We love the young men we have. I think with just three returning starters, we have challenges because so few of our players have a lot of game experience. There are only three of them with significant game experience.

So there are challenges there, but there is great opportunity because of the young talent we have and the returning players who haven’t played a lot but have worked hard at their game.

Find the full transcript after the jump and we’ll have more coverage from Media Day in the coming hours and days.

Q. You mentioned a couple of weeks ago you were going to need time to figure out your starting lineup. Do you have a better idea what that’s going to be?
JOHN BEILEIN: We are narrowing it down a little bit and we’re basically trying to figure out what’s the best way to use each guy rather than who are the five that are together.

I would love to have a multi-positional players, but we don’t want to put them in opportunities where they’re comfortable while we grow their ability to play different positions.

If you saw our practice yesterday we had four different combinations out there, and I don’t think any one of them blew our coaching staff away of working as well together as they all have to be successful. We are just continuing to experiment with it. It will happen probably hopefully we will have something in place by the start of the Big Ten season.

Q. Seems like you’ve got your program in place the way you want it to be after a building process. Talk about how long that takes, what’s reasonable for a fan base and what the obstacles are.
JOHN BEILEIN: I think the biggest obstacle is are the other teams aren’t going away. I mean in a place like the Big Ten if you look back, I came in here five years ago and there were five or six programs, maybe Thad it really going. Basically they still all have it going.

So to get to the sixth, the seventh, the eighth spot which we were able to get to is one step, now making that next step is really hard. I think anybody building a program has to understand, it is difficult, because people weren’t stepping back and saying, hey, let’s let Michigan have their turn. It’s hard to get there. If you establish the culture and get the right breaks here and there, anything can happen.

Q. Can you describe the way you’re going to be looking to Tim Hardaway, Jr this season? He’s an upperclassman, has a lot of experience. Can you talk about his role?
JOHN BEILEIN: I think defensively he’s been right where he has been. Our young players, it’s very difficult to expect a lot from them defensively. There is so much they have to learn. Now he’s at a point where he’s priding himself in how he has grown defensively. Offensively, when he plays the three or the two, how much he has the ball off the dribble, off the pass, I think he’s growing comfortable no matter what he’s doing and learning about his strengths. I love coaching him everyday because the intensity is incredible.

Q. What can the first few weeks of practice tell you about what we can do they college level?
JOHN BEILEIN: What it can tell me is they are receptive to continuing to be coached. They really want to learn whatever we can teach them and what their teammates can teach them. When you go out to a practice, there is enough going on with a player when they’re receptive to practices and pick things up quickly, that’s refreshing.

We have been fortunate to have a lot of players over the last couple of years that have that type of attitude and these five seem to be in unison to be able to grow as a group, whether they’re playing or not on the same team, grow as a group in how much they can take in and then put into action.

Q. Can you talk about Burke leaving Michigan and trying to go to the NBA, what did it mean to your program this year to get him back and where did you want to see him go from year one to year two in his progress?
JOHN BEILEIN: We had similar opportunities for Morris the year before and we were very fortunate that Trey Burke was able to step in and fill in so admirably as a freshman. While it worked well, when you don’t have a freshman coming in at point guard, and at that time we did not, it is difficult to continue to rebuild through that position.

Having him back has been helpful because he’s a good player, he is a winner, he’s proved he’s a winner and having talent is one thing, teaching winning is another thing. He’s been through a year where he was so helpful in that Big Ten championship in games both at home and on the road.