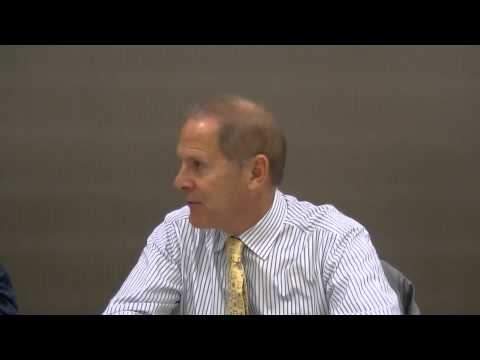 John Beilein held court at a roundtable discussion at the Hyatt Regency in Rosemont, Illinois for Big Ten Media Day. We were on hand to listen to him talk about the development of the freshmen, Caris LeVert in particular, why he thinks the Big Ten has gotten so tough, and more. You can read the transcript after the jump or watch using the embedded media player below.


On playing Spike Albrecht and Trey Burke at the same time:

It’s possible. We did it yesterday. It could happen. Late in games, especially. Because both of them are very clever with the ball.

He probably still needs — I’m talking any freshman — any freshman is going to have trouble when they get screened by a 210-pound Wisconsin big man. I don’t care who it is. There’s an issue there that you haven’t had before.

On the three players from Northwest Indiana:

Here’s what I really like about Glenn so far: Glenn’s really receptive to coaching and when we give Glenn some ideas to improve, he puts them into action almost immediately.

Similar. He’s got a lot of energy, he brings a lot of just enthusiasm to every practice. As a result, he’s shown us what a great team guy he can be.

On if all three of the Region guys will fit into the rotation:

That’s our hope. We think all three of those guys could get in there in bits and pieces. The volume, we still have left to determine.

On Zack Novak’s influence in recruiting those players:

They knew each other, they’re from the same high school, and of course he hosted them on their visit. I would say that it’s hard to spend a lot of time with Zack Novak and not want to be attracted to things that he likes, and Zack Novak loves Michigan.

On his team’s health:

I would say it’s normal bumps and bruises that we have. Jon Horford had a little bit of a twist in his knee as we went out the door yesterday so we’re examining that now, I don’t have a report yet. It happened with five minutes to go in practice, it actually ended practice as we were coming here, so I don’t have a full report yet.

There’s a couple of our players who are still rehabbing, and they’re trying to be very protective of them as far as what kind of stress we put on them right now, whether it’s Eso — Mitch McGary is still working with something with his ankle, his foot. He can go full go, but we’re just trying to protect some areas. So some guys might get on the bike when it’s time for sprints. For the most part, I think we’re in good shape. But we are concerned about Jon. We’ll get a report later on today.

He’s almost full-go. We’re trying to build up strength in one of his legs that had atrophied from a prior injury. To just allow him to move a little more freely.

On if the injury has affected him in practice:

Yeah, I think when you can’t go full-go all the time it hurts. But we’re hopeful that we can have this — not necessarily fixed, but much more manageable by the time we get to see him. He does a lot of rehab right now. But it doesn’t affect his practice but a little bit.

On the captains and how the decision is made:

We have had some discussions about that. It’s been made differently every year. There’s been years where there has been no doubt, and there’s been years where we vote, and this is not one, obviously, where there is no doubt. We may have a variety of captains, we may have captains all year or game captains. We’ll have to wait and see how it all plays out. We have a lot of people who would like to do that, too, so that’s good. A lot of men are showing leadership qualities. Picking the right one is important.

On the different starting lineup combinations he’s tried in practice and if any featured two bigs:

Oh yeah. That’s been a major part of our preseason is trying to play two posts. Now, once the games start, we’ll have to see how it works and how much we want to do it. The volume that we do it with is to be determined.

On whether his focus has shifted from getting back on defense to crashing the offensive boards with the new bigs:

He wants to guard people, and he’s still figuring out the nuances of guarding people, all the screens that you get hit with are much different than the ones you face in high school. But he’s got the body, that now he’s using it more and more. He’s at 225, into having the body to handle a lot of the physical play in the Big Ten.

He has terrific work habits. He shoots the ball good enough. I don’t think he’s got a shooter’s mentality yet, but he can shoot. I would expect you’ll see him out there.

On the expectations for the freshmen:

There are only three significant minute guys coming back. These young freshmen, if we are going to have the type of season people are talking about, these freshmen are going to have to play like veterans. And that’s very, very hard to do. I like our freshmen, I love working with them every day. But we have a long way to go for them to be veterans. Many teams win at a high level, the more veterans they have.

On Getting to Michigan State’s level as a program:

On the Big Ten’s success:

All of the NCAA has been cyclical with different leagues. Teams will come and teams will go, you have outstanding coaches, outstanding programs. But basically coaches need time to build a program and build their brand, and right now, that’s what’s happening. Right now, we have nine or ten coaches that have either been there for a really long time, like the Tom Izzos and the Bo Ryans, or the ones that have been there for four or five years, like Matt Painter, like myself, Tom Crean now is in his fourth year. You get your program in place, and the ADs are confident to stay with coaches when they were rebuilding and not look for quick fixes. Other leagues are probably going through what we went through five or six years ago, with a lot of changes. I think there has been an awful lot of support from administrations in rebuilding these programs. Just speaking for Michigan, Michigan’s given us incredible support to rebuild this program from the minute I stepped on campus, and I assume there has been similar support at the other programs. Like Indiana, Purdue would be great examples.

On the Big Ten taking advantage of major in-region talent:

First of all, I think the high school programs and the AAU programs are as good as any in the country, from top to bottom, all through the states of the Big Ten. When you have programs like that, the players are moving in your direction, their fundamentals are sound, and they’re watching the Big Ten Network, and they’re watching these teams on TV, and it’s a great opportunity to go someplace where your parents can watch you play. Your family, your friends can watch you play. It’s always been a fertile ground. Between the ACC, the Big East, as all these leagues are still forming, the Big Ten has stayed very strong with all these schools and I think it’s really served us well.

He’s one of those guys, where you try to figure out, “How did he just do that?” Because he’s got incredible quickness, he really is a great kid to coach. I’m telling you, these five freshmen are really wonderful to coach. He’s no exception. I think he’s got a great combination of speed and ability to shoot it. I know he’s not one that our guys like to guard in practice. It’s not a lot of fun for a lot of our people to try and stay in front of him.

I have a theory: people who really see the floor offensively, see the floor defensively and that makes them better defenders. Nik sees the floor offensively really well, so therefore his defense — I don’t care, you could have the greatest high school coaches in the world, you’re being really prepared for all these screens being set? It takes some time. And he has really understood every day, okay, this is this type of screen and this is how I defend it. You only do that when you really feel the whole game, and he does.