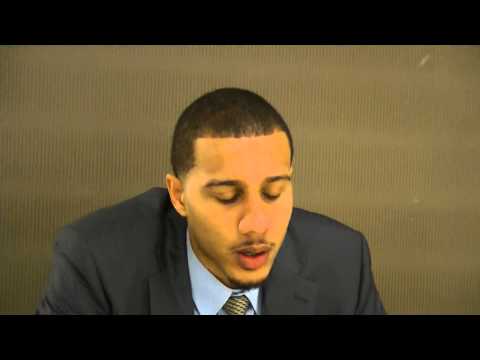 Jordan Morgan was the third player in Michigan’s contingent in Chicago, Illinois on Thursday morning for Big Ten Media Day. Morgan discussed both the possibilities and potential issues with playing two posts and also shared his thoughts on the freshmen class. Watch Morgan’s interview in the media player below or find notes and quotes after the jump.

On replacing Zack & Stu’s leadership: “I don’t know if it’s as much as trying to take over for Zack and Stu. It’s more just realizing that we have to lead as a team. I think it has been a group effort from all of our veteran players. We have to push the young players to learn fast and to do better. So it’s been a collective effort to teach.”

On his individual goals for the season: “Just to keep a good balance and composure level. That’s a big step for maturity. Especially now being in that veteran leadership role. Young guys will feed off of my energy, so just eliminate any negative energy that I can in my game.”

On staying out of foul trouble: “I think I was better last year, definitely, but that’s just more recognizing what I’m doing and making a conscious effort.”

On having fellow big men on the court with him: “I don’t have to do all the banging down low. I definitely still have to do it, but not all of it. I’m not the only one fighting for offensive rebounds, fighting for rebounds, it’ll also just give us a lot of versatility. Allowing us to experiment for things. They can’t just focus on boxing one guy out when we have two big bodies in there”

On the two post offense taking time to adjust: “We’ve made steps recently to try to figure it out. It’s just a matter of seeing what we can do, different looks, how we can change some of the things we would normally do. What normally would have been a shooting four man is now a more physical four man. So instead of maybe spacing, they might drop down below the rim for a drop off. It’s just kind of playing with these pieces and that’s on coach so he’s great at working this offense. He’s always willing to adapt and there’s definitely been an effort to move pieces around and experiment.

On if things get crowded in the lane: “It can get a little bit crowded but at the same time we’ve got bigs that are versatile and can maybe move out some. It balances out. Like I said, coach is still playing with these pieces just trying to see what fits – and he spends all day in his office doing just that.”

On two post defense: “Somebody has to be able to guard the perimeter. I’ve been working on it a lot. If you’ve got two bigs in there, somebody is gonna be pushed out there in perimeter, especially guarding ourselves (in practice) somebody is gonna be out there. We all do our defense reps and we’ve been working at it. It’s just a matter of learning it and using experience to transition. Just because you move out there, you can’t forget defending the post. It’s just building on what we know.”

On freshmen learning to play Big Ten defense: “Definitely. It’s hard. One of the hardest things is help defense. You have to know and have the confidence that if you help, somebody is going to help you. You don’t always see that from freshmen so it’s one of the things that we’ve been pushing on them… They’ve gotten better at that in just a few weeks in practice so they’ll only keep going from here.

On crashing the glass: We’ve always sent our four and our five to the glass.It’s just a matter of .. you might not have been able to see our four man within all those trees. We’ve always had our guards getting back and our forwards getting to the glass. Now it’s just a matter of a 6-foot-4 forward versus a 6-foot-8, 6-foot-9, 6-foot-10 forward. It makes a big difference. Hopefully we can get more offensive rebounds and we should but in no way are we giving up defensive transition.

On lineups: That’s what [preseason games] are for. I really couldn’t say how close we are. It’s coach’s decision.He’s changing things every day. Putting different teams together, ‘here let me see this team’, he’s looking at everybody playing every position.  I can’t even imagine how many ideas they have. When we are in class and stuff they are in there just talking about it all day.

On Caris LeVert: Really really humble kid. He works really hard and he can play man. He kind of flew under the radar because he had a late growth spurt but he’s put a lot of weight on and he’s going to continue to do that under Jon Sanderson. I mean I think definitely in years to come he’ll be a big time player in this conference because he has such a desire to get better. Just the amount of time he spends in that gym is… not many people really spend that much time.

On Nik Stauskas’s shooting ability: “He just really wants to shoot. He’s a knock down shooter, he wants his shot and if you’ve got that hand down, it’s a problem. We need players like that especially with the penetration skills and the post skills that we have out there.

On playing differently in third season: “We’ve always practiced guarding the perimeter because bigs will get switched out there. But now it’s the amount of time I’ll be spend out there is a lot more. Instead of getting switched out there I’m stuck out there. So there’s actions that I have to guard that I might not have had to before. It’s definitely a different experience being out there permanently . If I’m out there, I’m really out there instead of trying to find someone to switch back.