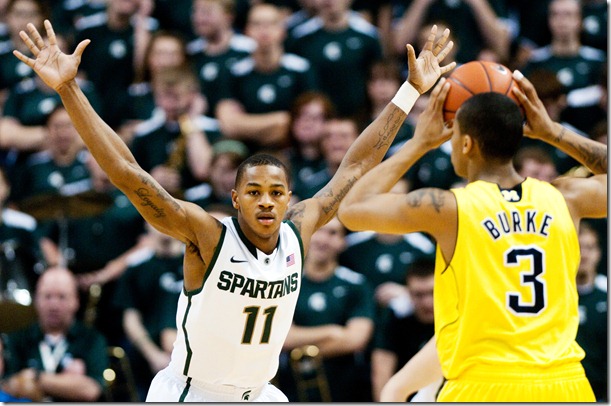 We talked to some players at Big Ten Media Day about one of the most pressing questions facing any team gearing up to play Michigan: How do you guard Trey Burke? Ohio State’s Aaron Craft, Michigan State’s Keith Appling, Purdue’s Terone Johnson, Indiana’s Jordan Hulls and Illinois’ Brandon Paul all explained their approach last season.

“The biggest thing is, he keeps his dribble alive. A lot of guys pick up their dribble and you can relax a little bit. But he is always probing constantly, looking for an alley to go through, so you can’t take a break.I think he’s done a good job of diversifying his game, so he can score in a variety of different ways, so that always makes it tougher for a defense.”

“Obviously, he has the ball in his hands a lot and he’s a great player, he can make things happen. You want to try to keep it out of his hands as much as possible, right? So, that’s some of the stuff that we do, and they have other players on their team that you have to focus on, so we just try to play the best team defense on him that we can and hope they miss some shots, honestly.”

“I just watch as much film as I possibly can, you know? I kind of try to study his moves, study the way his team sets their screens, so I’ll know how to get over them. It mainly comes down to watching film and learning the moves. One of the things that coach puts an emphasis on is, he doesn’t want to offensive player to dictate what we do — we want to get them to do what we want them to do.”

“I think defensively you just try to get him to be as uncomfortable as you can. When he gets comfortable, he can do a lot of things offensively. Also, just defensively making him guard a little bit to wear him down. Guarding him full-court, you know, I think that also wears him down a little bit.”

“Last year, we just tried to keep him from the lane. Obviously, he’s a tough player. Guarding him is no easy task, you know, he’s a great player. He can score the ball as well as get his teammates open shots.”

Everyone has their own approach, but who had the most success? Here are Burke’s splits against the five teams interviewed for the piece.

Burke’s best Big Ten performances have come against Minnesota (29 ppg, 3 apg, 19 of 25 shooting, 86% eFG% in two career games) while Ohio State and Purdue have done arguably the best defensive jobs on Michigan’s leader. Burke will hope that additional talent on the wings and in the post will prevent opposing defenses from keying entire systems toward him and allow Michigan’s offense to take a step forward overall.