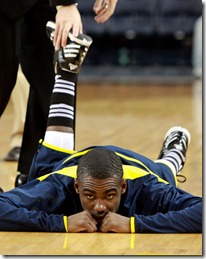 Michigan is ranked 5th in the Associated Press Top 25 poll that was released this afternoon.

Michigan, also ranked 5th in the USA Today Coaches Poll, is now ranked in the top ten by both major preseason polls. The Wolverines were also tabbed to finish second in the Big Ten at the conference’s media day on Thursday morning.

Three Big Ten teams are ranked in the top five with Indiana tabbed as preseason favorites and Ohio State in the fourth spot. Michigan State (14) and Wisconsin (23) are also ranked.

The Wolverines have been tabbed as a top ten team by several preseason magazines as well. Michigan is ranked 3rd by Lindy’s Sports, 5th by Blue Ribbon Magazine and 6th by Athlon Sports.

Find the full poll after the jump.