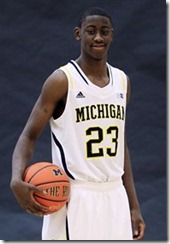 John Beilein, Trey Burke, Tim Hardaway Jr. and Jordan Morgan faced the media on Thursday morning at Big Ten Media Day outside of Chicago. With just under a week until Michigan’s first exhibition game, the group had plenty to share about the upcoming season. There was plenty of discussion of how talented the Michigan roster is but the Wolverines still have a lot to figure out, from some injuries, to the starting lineup, to captains and more. It was an informative day overall and here’s what we learned.

Michigan beset with injuries to Mitch McGary and Jon Horford

John Beilein informed the media on Thursday that Mitch McGary has not been able to go 100 percent in practices because he’s working an atrophied leg back up to the strength it needs to be. The atrophy is a result of a previous injury, and McGary is rehabbing consistently.

While McGary can participate in most of practices, the injury may inhibit his conditioning.

“Mitch McGary is still working with something with his ankle, his foot. He can go full go, but we’re just trying to protect some areas. So some guys might get on the bike when it’s time for sprints,” Beilein said. “When you can’t go full-go all the time it hurts. But we’re hopeful that we can have this — not necessarily fixed, but much more manageable by the time we get to see him. He does a lot of rehab right now.”

As for Horford, Beilein said he sustained a knee injury at the very tail end of practice before he left for Chicago. He has not received a report, and Horford supposedly went to run tests after practice.

“Jon Horford had a little bit of a twist in his knee as we went out the door yesterday so we’re examining that now, I don’t have a report yet,” Beilein said. “We are concerned about Jon. We’ll get a report later [Thursday].”

Caris Levert can play — everyone thinks so

Although he was far from the most-publicized freshman in Michigan’s incoming class — some would argue he got the least publicity of all, or at least it’s a tie with Spike Albrecht — according to just about everyone, Caris LeVert can ball.

“He’s one of those guys, where you try to figure out, ‘How did he just do that?’ Because he’s got incredible quickness, he really is a great kid to coach,” John Beilein said during a roundtable interview on Thursday. “I think he’s got a great combination of speed and ability to shoot it. I know he’s not one that our guys like to guard in practice. It’s not a lot of fun for a lot of our people to try and stay in front of him.”

As for comparisons to current NBA superstars, LeVert has that covered. Given that he got to Michigan at around 6-foot-5 and a willowy 165 pounds, the nickname his teammates have come up for him seems appropriate.

“We call him ‘Baby Durant,’ not just because he has that body type, but he can do everything he does,” Tim Hardaway Jr. said. “Put the ball on the floor, defense, shoot the ball very, very well and rebound.”

It appears that among the high-profile talent Michigan has coming in, they may have managed to find a diamond in the rough,as well. If LeVert can contribute in a meaningful way this year, he could go a long way toward stretching defenses, providing backcourt depth and locking up opposing long, athletic players.

The lineup is still working itself out

One of the most talked-about questions among Michigan fans have is: Who will start the first game of the season? John Beilein’s answer has never varied: You’ll see.

However, there were a few nuggets to take home from Media Day regarding possible lineups. Beilein said the coaching staff tried “four different combinations” at practice on Wednesday. Given all the variance, it’s not surprising Beilein plans to have a lineup set by “hopefully” the start of Big Ten play, as opposed to the first official game.

During his roundtable discussion, Beilein even hinted at the possibility of Spike Albrecht and Trey Burke playing together.

“It’s possible. We did it yesterday. It could happen. Late in games, especially,” Beilein said. “Because both of them are very clever with the ball.”

As far as how positions will shake out, both Trey Burke and Tim Hardaway Jr. had the answer for Glenn Robinson III. While Hardaway said the three would “definitely be his natural position,” Burke went into a bit more detail.

Jordan Morgan focused on the fact that the three and the four positions are interchangeable which will allow Robinson to slide into either spot.

“He’s a forward obviously and our threes and our fours are interchangeable,” Morgan explained. “He’s a three man but he can play the four just because they are interchangeable. If we want to go a smaller lineup, then he can be our four man.”

Nik Stauskas can fill it up

Michigan’s well-known three point shooting practice drill 50 in 5, in which a player must make at least 50 3-pointers in five minutes, has recently been altered to 60 in 5. Nobody’s saying it, but it might just be because Nik Stauskas was making 50 look too easy. The reports of the freshman’s shooting prowess are so hyperbolic that Trey Burke was actually confronted with the question, “Does Nik Stauskas miss?”

Even crazier? Burke hesitated and answered with a caveat: “He misses,” he said, finally. “But it’s different.”

Burke said the consistency of Stauskas’s shot is something the whole team marvels at. Stauskas, along with senior sharpshooter Matt Vogrich is absolutely deadly from beyond the arc. And he proved it by setting his own personal record in the 60 in 5 drill.

“I think Nik might have hit about 78 threes, which is real impressive,” Burke said. “For Nik coming in as a freshman and hitting 70-some threes in a drill where a lot of players on the team struggle to get 60, some struggle to get 50, just shows that he’s a great shooter.”

Beilein’s take on why the Big Ten is so good

There was much talk from all the coaches about the seemingly invincible state of the Big Ten. John Beilein offered his personal opinion on why the Big Ten finds itself in the position it does. He outlined two main reasons: patient, discerning athletic departments that value continuity, and the Big Ten Network.

“Basically, coaches need time to build a program and build their brand, and right now, that’s what’s happening,” Beilein said. “Right now, we have nine or ten coaches that have either been there for a really long time, like the Tom Izzos and the Bo Ryans, or the ones that have been there for four or five years, like Matt Painter, like myself, Tom Crean now is in his fourth year.”

Beilein went on to say that athletic directors in the Big Ten have resisted the temptation of looking for a quick fix, and have instead embraced the necessary rebuilding process. Those decisions, according to Beilein, are paying off now.

“Just speaking for Michigan, Michigan’s given us incredible support to rebuild this program from the minute I stepped on campus, and I assume there has been similar support at the other programs,” Beilein said. “Like Indiana, Purdue would be great examples.”

As far as the influence of the Big Ten Network, Beilein see it as an invaluable recruiting tool and a great way to keep talent in the region of the Big Ten.