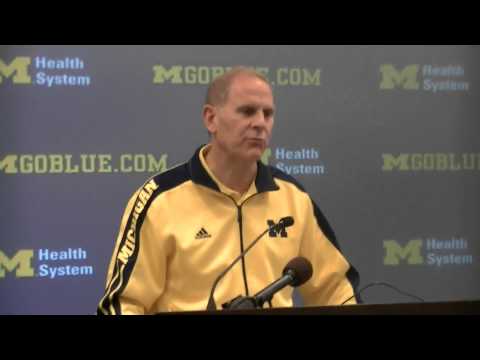 John Beilein was available to the media on Wednesday. Michigan’s coach talked about Trey Burke’s suspension, the injuries to Jon Horford and Mitch McGary, the starting lineup for Thursday’s game against Northern Michigan and more. You can read the transcription after the jump or watch using the embedded media player below.


On suspending Trey Burke for tomorrow’s game against Northern Michigan:

You obviously got the press release here, so that’s all I would prefer to say about it. Trey is a good kid but he’s going to sit out this game and he’ll learn a very valuable experience. It gives us a good opportunity now for some of our guys. There’s probably thirty minutes available for them to play, and we look forward to seeing those guys play out there. In the meantime, our practices have been spirited and we’ve been making progress but we’re probably still not sure what way we’re going to play quite yet, so we’re still experimenting like crazy.

Spike will start tomorrow. He’s been in a backup role all year. He’s been running his team or both teams all year long. He’s been very good. He’s very clever. Hopefully what he’s been doing in practices, we’re going to see on the floor. He’s very clever and he has great vision, makes some plays that make us smile. I’m sure he’s going to make a lot of mistakes along the way. When you’re a quarterback, a point guard, you’re in that position where you may make a lot of mistakes. But, he grows from them.

The four that will start tomorrow will be Spike and Tim (Hardaway Jr.), Jordan Morgan and Glenn Robinson. Those four I know will start, and I’m still looking at the four or five options we have there with who’s going to fill in that fifth spot.

Mitch is going to be able to play. He’s really made good progress. He’s worked really hard. He came in here and with good food and weightlifting he got real big. That’s not good for your foot, and I’m not talking about fat, I’m just saying he’s really worked really hard on his diet right now. He’s probably going to play his best at 255 to 260 and he’s a little over that now. Horford’s not going to play, but he really feels good right now. It’s been one week since it happened and he’s making really good progress.

I hope (he’ll be available). He was really playing well, he was rebounding, he was doing so many good things. He’s worked so hard even last year when he was sitting out and now I want him to get in there. It’s a personal thing with me because I know when someone’s worked this hard, I want to get him an opportunity.

It’s interesting. Every team is different. Some are highly emotional, and some are very calm. I think they play off each other really well. We’re trying to get maybe the guys who are calm to amp it up a bit more and give us a little more enthusiasm and those who give us a lot of enthusiasm to be more on an even keel.

On the most excitable players on the court:

Tim and Mitch are both very emotional out there. Trey Burke has given us a lot of emotion in practice in a very positive way that he didn’t do as much last year. He’s been showing great leadership on the court.

On which defense he’ll play:

I think that this league is a man league. We’ll wait and see how much we play, whether we play any other zones that we’ve played in the past. Like most teams right now, we’re practicing a lot of man-to-man defense.

He’s getting stronger by the moment, he has a nose for the ball, he’s very bright, and I’m glad they allow freshmen to play in these exhibition games and with the minutes available he’s going to play some minutes tomorrow. Not two or three, you know, we’ll hopefully get him ten or twenty.

On what he expects of the freshmen tomorrow:

I expect them to be freshmen. I really do. I’m watching this Northern Michigan video, and I keep forgetting that when I was a Division II coach, we had good players. Northern Michigan’s got good players. A lot of people will see that and say, ‘They’re just playing a Division II team.’ No, every Division II team has players on scholarship who was one of the best players in their high school, ever. They can play. I don’t know how the game will go. We’re going to have five freshmen out there at different times. If they play beyond their years, that’d be something special, but we know it’s rare.

On how he’s dividing up minutes:

We’ve tried to do that. We have some guys who are targeted for thirty. We’ll have some thirty-minute guys. Whatever it takes to win the game. I think that we barely snuck by Wayne State this time last year, and we ended up winning the Big Ten Championship. So, we will go in it to win it and also try to get as many minutes as we can to evaluate.

On what the freshmen most need to work on:

The timing, because we’re playing with a lot of things both offensively and defensively. I think it would be a mistake if we just said, ‘This is the way we’re playing,’ the first three weeks without really knowing what people can handle. I don’t think you can change your game plan in February is what I’m saying. So I think we’re probably a jack of many trades, master of none right now.

We’ll probably look at them. I think we have necessities in a lot of areas where it would be tough to redshirt some, but if we feel somebody’s not going to get significant playing time and he’d be a great one to have in a fifth year, we’d make sure they had all the information they needed to make that decision.

I want him to be more aggressive. I want him to be more aggressive. He can really shoot, and he can really play. His assist-to-turnover ratio in practices has been really good for a freshman. Really good. That’s a great sign. A lot of times guys with that athleticism try to jump over everybody but he’s stopped on a dime and made some really good passes when a charge was looming.

On the freshmen learning two positions:

That’s been difficult because after a week we said, hey let’s throw the kitchen sink at them and see what they can handle. That’s why I’m saying that our execution, both offensively and defensively, is way off where it maybe should be. We’re closer than where we were when I talked to you last week, we’re closer than we were when I talked to you three weeks ago, but we’re not where we expect to be in January and February, that’s for sure.