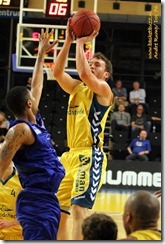 Michigan’s captain for the last three seasons, Zack Novak, is the most notable face missing on the 2012-13 Michigan roster but the 6-foot-4 guard landed overseas in Holland playing professional basketball for Zwolle.

We caught up with Novak to discuss the upcoming season, the program that he left behind, Mitch McGary and most importantly a new t-shirt that he’s selling this season.

I think many people are worried about the leadership because of what happened in the 09-10 season after the departures of CJ (Lee) and Dave (Merritt).  This is a totally different situation, though. Coach B had only been in Ann Arbor for two seasons and the culture was nowhere near set in stone at that point. All of the players on the roster now only know one way to do things. The coaching staff has put a ton of emphasis on establishing what exactly it means to be a basketball player at the University of Michigan with their core values: Unity, Passion, Appreciation, Diligence and Integrity.  I have no idea who will be named captain, but I do know that every returning player on this team knows the right way to do things. From the reports I get, the freshmen are extremely receptive to the culture around them and are buying in. Without being around the team every day, it’s impossible to throw out names, but I’m not very concerned about it.  The guys know the potential they have this year and I believe they will all be focused on the right things.

Mitch McGary has been described as a bigger version of you. Both coming from Chesterton, what do you see Mitch contributing this year?

Whenever I think of Mitch McGary, I can’t help but chuckle to myself. I’ve known Mitch since he was about 9 years old playing up a year in Little League baseball. I’m not sure everyone realizes that Mitch was actually a freshman on my high school team during my senior year because he took his prep year. That kid has grown so much not only as a basketball player, but as a person over the past five years.  I joke with him a lot telling him he copied me because when he was younger he was not the madman he is today. I watch him play now and I do see a lot of myself in terms of intangible qualities. Thankfully for all of the fans (which I am now too), he’s 6’11” with those qualities and not 6’4″!  Finally, we have a four man with some size. About time.

The other hot topic this season is playing with two posts. For all intents and purposes you were Michigan’s power forward for the last year. How do you see the four spot playing out this year with so many different styles of players and options, none of which are really a true stretch four like we’ve seen under Beilein.

This is an interesting one. I think the team has a couple of great options here. With Trey being as good as he is, the coaches tooled with the offense to get him in more ball screen situations. That trend started with Darius and picked up even more last year. My freshman and sophomore years, we did not set hardly as many ball screens because our personnel didn’t call for that. My point is that Coach B has shown his willingness and ability to tweak the offense in order to fit the tools at his disposal. I think you will definitely see two post line ups this year if for no other reason than the amount of depth that they suddenly find themselves with in the front court. We struggled on the glass at times in the past, but with two bigs that shouldn’t be an issue any more. All of that being said, I wouldn’t expect the 4 guard line up to be completely scrapped either. G Rob (Glenn Robinson III) is more than capable of playing the 4 and also a huge upgrade over yours truly on the glass. I get a kick out of everyone making a fuss about “natural positions.”  In a 2 guard offense there are three positions, not five. We run 2 guard here in Holland and I’m now at my “natural position” playing the 3 and I feel absolutely zero difference. Defensively, there are so many switching patterns that you end up guarding almost everyone else anyways. I even think Tim is versatile enough to play the 4 position in a pinch. I think he would have a much easier time guarding the opposing 4 men in the Big 10 than they would have guarding him.

Shooters. You, Stu and Evan were a significant chunk of the three point shooting attack last year, will this team have a deficiency of shooting options?

This is a two part answer. First, I don’t think there will be any deficiency at all. Trey is an underrated shooter in my opinion. He has to take a lot of very tough shots from the deep and converts them at a pretty good rate. When he’s open it’s usually in.  I think T-Hard (Tim) will also get his stroke back this year. He has diversified his game much more now to the point where he isn’t going to be forced to take some of the tough 3’s he has in the past to get his shots in the offense. Shooting open shots equals better efficiency. Nik seems to be a huge option, but I know it is very hard to come in and shoot with high efficiency as a freshman (see Jon Diebler) because of the quality of the defense compared to high school and the wear and tear the body takes. With the exception of a little slump last year, Matt Vogrich (Matty Ice) has shown the ability to hit shots throughout his career. The team has a number of options for people that can hit the three.  The second part of this answer is with the weapons this team has I don’t think they will have to be nearly as reliant on the 3 point shot as our teams were. Stu and I came in with a mindset that we were 3 point shooters. Over our careers, we were able to develop to the point where we were comfortable putting the ball on the deck and scoring off the move, but at the end of the day I think both of us would agree that if we needed a big bucket we would want to get some daylight to get a 3 off. That means we almost always had two guys on the floor that were primarily shooters. With this team, they have guys who are more than capable shooters, but that isn’t necessarily the first shot they look for within in their game. The ironic thing is, having so many guys that can put the ball on the deck and get in the lane will open up the 3 point line more I think.  Remember, shooting open shots equals better efficiency, so I don’t think they will have issues there.

Name a surprise player on this year’s team and why.

With all of the coverage on the team is it even possible to have a surprise player? I feel like everyone knows what time those guys go to the bathroom.  If I had to pick one though I would have to go with my man Spike. Funny story here. I’ve been good friends with some Crown Point guys, including Spike’s brother Steve, since I was about ten.  In the spring term after my junior year, I was over their way staying with another buddy. I went to an open gym and was unable to play because I had a little injury. Spike was playing that day and I remember thinking to myself, “What is the difference between a guy like Spike with no offers and other people I’ve played against in college that I swear are no better than he is.”  About 8 months later, that same buddy I was staying with called me and told me Michigan was recruiting Spike and the rest is history. Spike can hoop. I think he’ll have a great career.

Things are going well here in Holland. Our team is 3-2 in the league. Our coach patterns our offense off of Coach B’s 2 guard system, so it was a pretty easy transition on that front. It’s different from college in the respect that my team needs me to score a little bit more and I can’t play quite as physical without getting in foul trouble. On Sunday, I just had one of those days. Bacari told me all last season that one day he just felt like I was going to go off for 30. Unfortunately, it never happened at Michigan, but I think it was the day he was talking about. I’m not sure if I’ve ever been more on fire to start a game ever in my entire life. It was definitely a ton of fun and above all else we got the win. We play this upcoming Saturday against Rotterdam. On a side note, we played our second game against Leiden and as I was walking out of the gym I saw a Jevohn Shepherd (aka the Chief) hanging up on a huge poster. It was nice to see a familiar face.

Tell me about the t-shirts you are selling and where they are for sale.

Underground Printing reached out to me about a month ago wanting to come up with a tee shirt idea. They wanted to incorporate the bloody face picture from my freshman year and pretty much let me come up with a slogan for it. When I was in fourth grade, we won the state championship and my dad had shirts made up that said PLAY HARD…because chicks dig scars and championships last forever. I suppose that stuck with me. When I was thinking of what the slogan for this shirt should be, I wanted something that my friends would want to wear around campus and all Michigan fans would get a kick out of and wear to games.  “Chicks dig scars” was perfect for that.

In my career, I was often Mr. Serious in the media, but outside of basketball I like to joke around and make people laugh. I hope to see tons of people at the new and improved Crisler Center rocking the shirt this season! The shirt can be purchased at any Underground Printing store in Ann Arbor, Moe’s or online here.