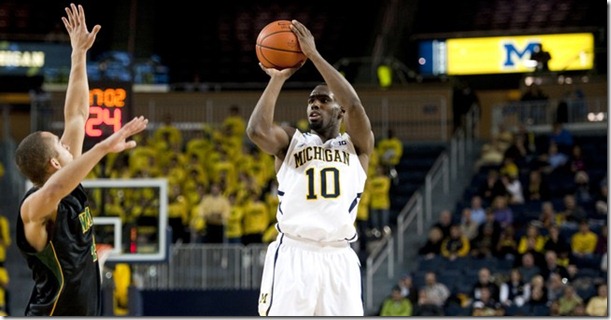 It was just an exhibition game but it was tough to not be at least a bit excited as Michigan dominated Northern Michigan in its first live action of the 2012-13 season, without its preseason All-American point guard Trey Burke. The Wolverine freshmen showed that they were more than capable of leading the show, scoring 54 of Michigan’s 83 points in the 36 point victory.

Spike Albrecht was the surprise star of the evening, stepping in for suspended Trey Burke and tallying 16 points on 4 of 7 (3-6 3pt) shooting with six assists to just two turnovers. Albrecht showed no signs of nerves, controlling the game from the opening tip as he scored or assisted Michigan’s first 12 points of the game, spearheading a run that allowed the Wolverines to jump out to a 20-2 start. The freshman point guard had plenty of support in his first college action. Nik Stauskas led all scorers with 17 points while Glenn Robinson III and Tim Hardaway Jr. both added 13.

The four factors make it clear that Michigan dominated every aspect of the game as you would expect with a top five team facing a middling Division II opponent.

Michigan grabbed 19 offensive rebounds for an offensive rebounding rate over 46%, which would have been its best offensive rebounding performance since November 2010 against Gardner Webb had it occurred in a live game. The Wolverines got to the line often but scored more effectively from the perimeter (13-31, 42% on threes) compared to inside (14-32, 44% on twos) on the night. This was also the same three point-centric offense that we’ve seen for years as the Wolverine attempted 49% of their field goals from long range. Despite John Beilein giving roughly 50% (99 of 200) of the available minutes to his five freshmen, Michigan turned the ball over on less than 13% of its offensive possessions an impressive mark this early in the season.

Is this the story of a Michigan team playing against a Northern Michigan team that was simply over matched? Or is it a Wolverine squad ready to impose its will throughout the season? Only time and further competition will tell but there’s not much to complain about as of November 1st.

We saw very few instances of two true posts on the floor at the same time. Horford’s injury almost certainly played a part but for the majority of the game John Beilein stuck with Morgan and McGary at the five with Robinson, Bielfeldt and McLimans rotating through the four spot. Morgan, McGary and Robinson all impressed and looked natural in their positions.

This team has talent, that much is clear even at this early stage. There’s also still plenty to figure out after playing nine players for at least 10 minutes even without Burke in the mix. The rotation needs to be ironed out and this team needs to forge an identity and a leader while fighting through adversity. Bottom line, the season is arriving and you can’t expect a better performance from a team in its first game without its All-American point guard.