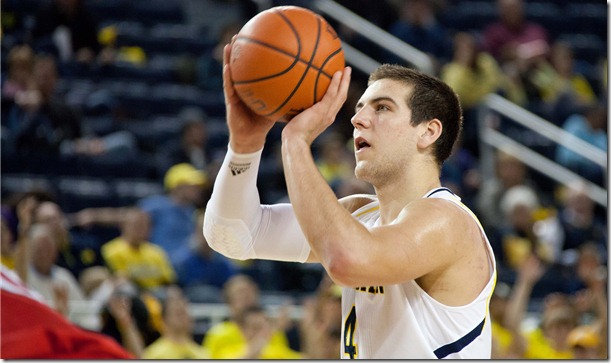 There’s been more than enough off-season debate as to whether Michigan is overrated as the fifth best team in preseason polls. Only time will tell, but through two exhibition games the Wolverines look every bit like John Beilein’s most talented team to date. Michigan cruised to a Monday night exhibition win over Saginaw Valley State by a final score of 76-48. The Wolverines scored inside and out, dominated the glass on both ends of the floor and overpowered the Cardinals.

Glenn Robinson III set the tone early with 10 quick points, finishing with 17 on nine field goal attempts, while Trey Burke was clearly the best player on the floor. Burke racked up 16 points and eight assists in just 21 minutes. While Burke and Robinson were the only Wolverines to reach double figures, the offensive attack was balanced as ten players scored at least one field goal and 23 of Michigan’s 29 made shots were assisted.

This was an extraordinarily slow 54 possession game as Saginaw Valley State attempted to take the air out of the ball offensively. The strategy didn’t pay off as Michigan’s offense was even more efficient than we saw in the season opener, cruising along at 1.40 points per trip, and its defense wasn’t far behind.

The new-look Wolverine offense still relies on the three point shot – 53% of Michigan’s field goal attempts were threes – but the addition of an offensive rebounding punch has been deadly. Michigan rebounded over 40% of its misses for the second consecutive game and turned 11 offensive rebounds into 13 second chance points. Most of all, Michigan shot the ball extremely well from inside and out, connecting on 75% (18-24) of its twos and 41% (11-27) of its threes.

The Wolverines were solid defensively except for one Achilles’ heel: three point defense. Saginaw Valley shot 50% on 20 three point attempts which marred an otherwise dominant defensive performance. The Michigan defense forced the Cardinals to shoot just 33% on two point attempts, rebound a meager 12% of their misses and turn the ball over on nearly a quarter of their possessions.

After the game, Beilein reiterated that Michigan is experimenting to a radical degree early in the season and emphasized that there are still many parts in motion (especially due to Horford’s absence). We saw some new wrinkles from the man in charge including signs of tightening the rotation. Caris LeVert and Blake McLimans played limited minutes while Max Bielfeldt appeared to be squeezed out almost entirely. Nik Stauskas and Mitch McGary appear to be the clear first options off the bench with Spike Albrecht spelling Burke.

Beilein experimented with several different looks including two posts (Morgan-McGary) and two point guards (Burke-Albrecht). With two posts in the game, it was encouraging to see Michigan make a dedicated effort toward throwing the ball into the post – something that has been a rarity in recent seasons. McGary and Morgan both had a couple post isolations and also played a little two-man high-low game on several occasions. The end result wasn’t there in terms of production, but the potential is there along with a plan from players and coaches alike. Defensively, this was a tough situation to play two big men because Saginaw Valley State was smaller than most Division I teams. Morgan generally guarded the four position, to mixed results. Michigan also experimented with a 2-3 zone with both big men which didn’t have much luck either – surrendering a corner three.

Michigan has only played two games that don’t count so it would be ludicrous to jump to conclusions. However, the excitement feels a little more real after watching the Wolverines take care of business in early exhibitions. Slowly but surely we’ll find out more about this team shortly as real games begin with Slippery Rock (Friday), IUPUI (Monday) and Cleveland State or Bowling Green (Tuesday) all scheduled to visit Crisler in the next week.