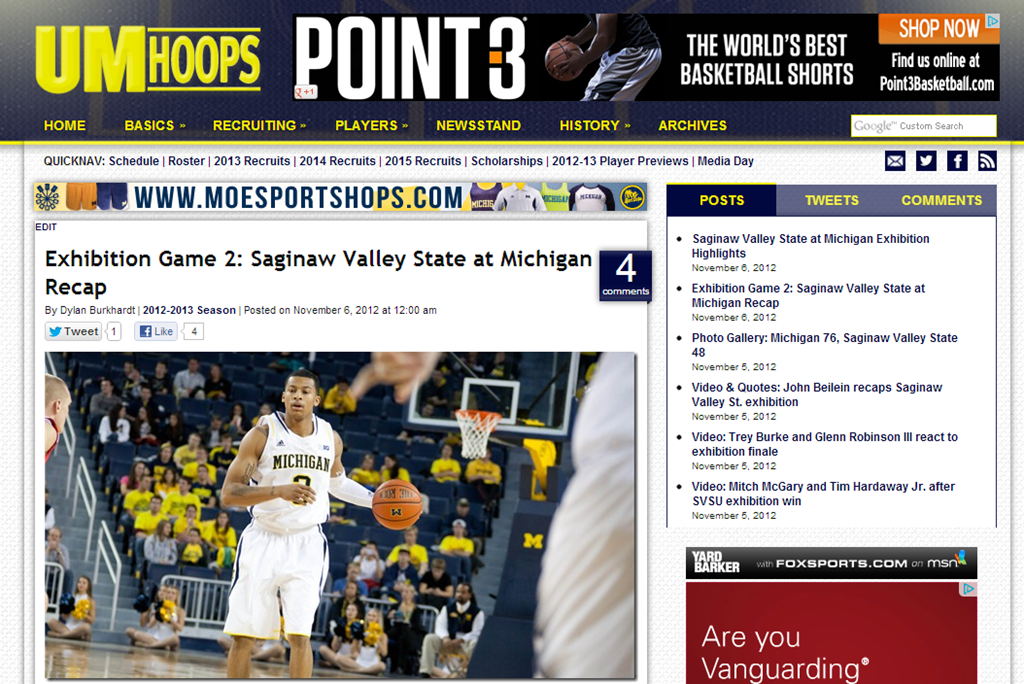 UM Hoops was founded in 2008 out of a simple love for Michigan basketball.

The Wolverines hadn’t been to the NCAA tournament in a decade and were in the midst of a dreadful 10-22 season but we believed there was a Michigan basketball community that needed a voice. Over the past five years the site has grown in lockstep alongside the basketball program. There have been more than a handful of memorable moments along the way.

Staying up until 3 a.m. writing in a hotel room about Michigan’s upset win over UCLA, with a job interview the morning after. The court rush after beating Duke or Michigan’s first win in East Lansing since the 90s. Every NCAA tournament has been special from the devastation (Duke, Ohio) to the jubilation (Clemson, Tennessee). And of course, watching Michigan’s Big Ten title share play out from an empty bar at Chili’s in State College, PA before the long drive home last March.

A Michigan program that was on life support when we started the site is now ready for what should be its best season since the Fab Five – and the future might be even brighter. John Beilein has all of the pieces in place from players to recruits to assistant coaches and facilities. Now it’s time to sit back and enjoy another journey.

Blessed to be a part of the ride, UM Hoops has made significant strides as well. Our traffic continues to increase with steady year-over-year improvement but we also want to strive to continue to expand. We’ve had a beat writer covering the team for the past two seasons and we’ve covered the AAU circuit with great ambition. Our goal is to provide everything that a Michigan basketball fan could want, in one place, for free.

We’ve provided first hand coverage from over 6 states, 11 summer recruiting events and 10 road or neutral venues in the last year. That’s easily as many, if not more than, our paid subscription-based competitors.

This site would have been nothing without those of you that have liked, shared, retweeted or commented on any of our thousands of posts over the last several years. But we still need your help.

Traveling to games and AAU tournaments takes time and money. The number of hours that myself, Joe, Kevin, Josh, Dustin, and everyone else have contributed to this site are almost impossible to measure. And all of those hours have been burned despite other primary commitments from jobs, to school and everything in between.

We’ve also made some improvements to the site. Hopefully you’ve noticed at least a few.

We wish it could, but advertising revenue alone isn’t enough to pay the bills. We’ve avoided – and plan to continue to avoid – a subscription model for as long as possible because we always intended this site to be free.

Simply put, we can’t continue without your support. Our call to arms this year is a bit different. We are setting a fundraising goal to support this season’s coverage.

We’ll be running our fundraiser over the next month and want to raise $10,000. This is significantly more than we’ve raised in past fundraisers but we want to accomplish more this season than we have in the last four years combined.

You can donate through our WePay page, or by using the widget below:

Whether you can donate $5 or $500, your contributions will go a long way toward keeping this site what we all want it to be. In turn, we owe you our continued, and improved, comprehensive coverage of the Wolverines wherever their travels might take us.