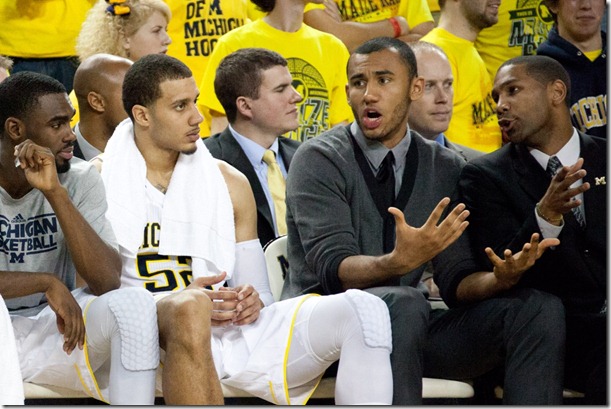 Michigan fans received some frustrating news at Big Ten Media Day when John Beilein reported Jon Horford had twisted his knee at the end of a recent practice. Unfortunately, it was news that fans have become accustomed to. Horford has been plagued by injuries throughout his career at Michigan that have limited his playing time and his effectiveness. There was a lot of excitement when Michigan acquired the younger brother of Al Horford three years ago out of Grand Ledge and while it isn’t fair to say Horford has been a disappointment, we simply haven’t seen him in action enough to make a judgment on his development one way or the other.

After missing Michigan’s exhibition games, the latest news on Horford’s status is that he should be “full go” for Michigan’s season opener on Friday. If he is, Michigan fans will finally get a chance to see what he can do. But given how crowded the Michigan frontcourt is at this point, how much they will see of Horford is still up for grabs. What Horford has shown so far in his career has been largely inconclusive. If he comes back from his injury strong and wrests playing time away from Jordan Morgan and Mitch McGary, it will be a good sign for his development and in turn Michigan’s front court. That being said, it seems more likely that Horford will work his way into the regular lineup slowly, especially coming off an injury that could limit his effectiveness. If Horford can stay healthy and log minutes, this will be the first season Michigan fans will get to truly see what he can do.

If he stays healthy, Horford has the ability to secure a spot in the regular rotation of post players alongside Jordan Morgan, Mitch McGary and Glenn Robinson III and solidify Michigan’s frontcourt. He is a big body with good rebounding instincts who plays hard and has some touch around the rim. If he has made progress in his game during the off season, he should see significant minutes. John Beilein hinted at Michigan Media Day that development is sometimes a frustrating process for Horford.

“He is taking the smallest steps sometimes you can take and sometimes steps backwards to take another step forward, but he is one persistent young man and he keeps working and working and working and he has had some workouts this summer with some of the similar mistakes he has made before — fouling right away, doing things he knows better than. He catches himself.”

Horford has always had ability, and with his added strength and two years of combined game experience and practicing with the team, he should have a leg up on the talented freshmen he’ll be competing with for minutes. Look for him to have a solid, though at times up-and-down, season.

This season is Horford’s chance to finally show the team what he can do. It hurts that he’s entering the season with an injury, but there are a lot of reasons to believe that Horford is still capable of playing well for this Michigan team. He is no longer a freshman and has plenty of experience to warrant those kinds of expectations.

Horford has all the tools this year: he is bigger and strong enough to compete with Big Ten big men in the paint; his point guard is one of the best in the country and will open up plenty of scoring opportunities for him down low. The pressure on him to produce won’t be excessive, but he has enough competition for minutes to push him. Michigan fans have been getting glimpses of Horford for two years. This year, a healthy Horford could be one of the feel good stories in Michigan’s rotation after a trying year of injury concerns.