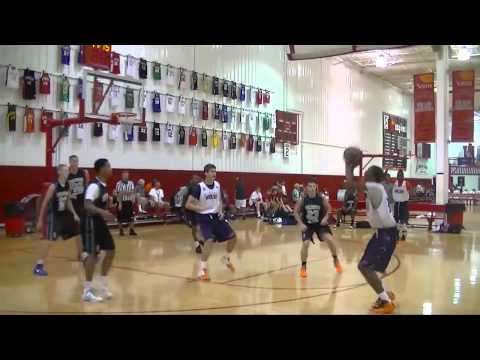 Michigan has made swingman Keita Bates-Diop, a top-30 prospect nationally, a recruiting priority in the class of 2014. Bates-Diop is one of four prospects with a Michigan offer but the Wolverines aren’t the only school heavily involved. Purdue and Illinois have long been up there with Michigan on the junior’s list of schools. But with Illinois hiring former Illinois State assistant coach Paris Parham, reports have swirled that Bates-Diop may be leaning toward the home-state Illini.

Parham was not hired to get Bates-Diop, but he does have a peripheral connection with the talented forward. Parham’s son goes to school with Bates-Diop and the two have grown up in the same neighborhood.

We caught up with Bates-Diop’s AAU coach Dave Kleinschmidt for a quick update on his recruitment. Kleinschmidt was skeptical about how much of an impact the hiring of Parham really had.

“I’m sure Paris has a little something to do with it,” Kleinschmidt said. “But overall it has more to do with the head coach and how Keita feels about him.”

Illinois has been making a late push for Bates-Diop with its new coaching staff, led by head coach John Groce. Bates-Diop lives about 40 miles away from Illinois’ campus and the Illini see him as a local kid they can’t afford to miss out on.

“In my opinion, Illinois might have a little catching up to do, because Purdue and Michigan were in on him early,” Kleinschmidt said. “I think Illinois, they have to make a push because he’s about 40 miles from campus.”

Kleinschmidt sees Bates-Diop holding off on a decision until after the high school season, despite reports to the contrary, and maybe even into the first live period in April. But he did hint that Bates-Diop’s family is tired of the recruiting process, which could mean an earlier decision.

While Illinois has moved up Bates-Diop’s list and appears to have built momentum, Michigan remains involved and Bates-Diop has yet to formally narrow his his.

“He’s probably got four or five schools in mind and Michigan’s one of them,” Kleinschmidt said.