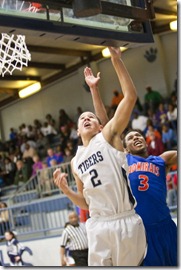 Class of 2014 Michigan recruiting target Devin Booker tipped off his high school season last weekend and the 6-foot-5 guard is off to a hot start. He scored 29 points in a six point loss to West Harrison despite facing box-and-one defenses for long stretches.

In an article by Creg Stephenson for GulfLive.com, Booker explains that he’s ready to slow things down on the recruiting trail and focus on his high school season.

“I had to slow it down myself,” Devin Booker said. “Now that school’s started and the season has started, I had to give everyone a timetable for when they can call and what-not. But it’s still crazy.”

“This year, I just want to be a better player than I was last year, give my team my best and help us go as far as we’re capable of going,” Booker said. “I’ve been talking a lot with my dad about taking on more of a leadership role. I’m running the point this year and I have to do the things a good point guard does — be under control and kind of run things out there on the court.”

Booker was also profiled by the Clarion Ledger and had positive things to say about Missouri when asked:

“My dad always tells me that the best choice is what I should pick, if it comes down to it,” Booker said. “But when I go up (to Missouri) they give me more attention than any other place.”

Michigan has done just about everything right in Booker’s recruitment and has put its best foot forward. After a summer that saw Booker attend nearly every major Nike event and camp, the request to slow things down in understandable. Booker’s most recent visit was to Missouri, in mid-October, and he’s also taken multiple trips to Michigan along with visits to Alabama, Michigan State and Mississippi State.

Jae’Sean Tate already holds a handful of Division I basketball offers including what appears to be a top two of Michigan and Ohio State. However, the Ohio native made his return to the football field this fall and has been impressive.

Tate quit football in August but opted to return to the gridiron midway through the season. Playing alongside Michigan commitment Taco Charlton at Pickerington Central, Tate helped his team to a conference title and playoff run. He scored a touchdown in a playoff win over Gahanna before Central fell to cross-town rivals Pickerington North last weekend.

Tate discussed his return to football with Scout.com:

Of course, Tate has still made time for basketball. In late October he participated in the Nike All-Ohio City Series and put on a show. Triple Double Prospects:

Coming straight off the football field for some basketball, Tate was impressive in his form all weekend. Showing off his staple, his strength and leaping ability, Tate played above the rim on the fast-paced Columbus team, where he threw down some monster dunks and alley-oops. Playing on the high and low block offensively, Tate showed that quick spin ability to go by bigger opponents, and shot it well enough to keep defenders honest on the wing.

Here’s footage of Tate in action at the City Series from Third Coast Hoops:

Tate isn’t the only Michigan target excelling at two sports, 2015 guard Luke Kennard has also impressed on the gridiron. Kennard has completed 125 of 224 passes for 1,746 yards with 23 touchdowns to just seven interceptions. His strong play has led No. 4 ranked Franklin (10-1) to the Division II Region 8 semifinal against Turpin on Friday evening.

Michigan basketball coaches have recognized Kennard’s ability on the football field, even making the trip all the way down to Ohio to watch their prized target play quarterback earlier this fall.