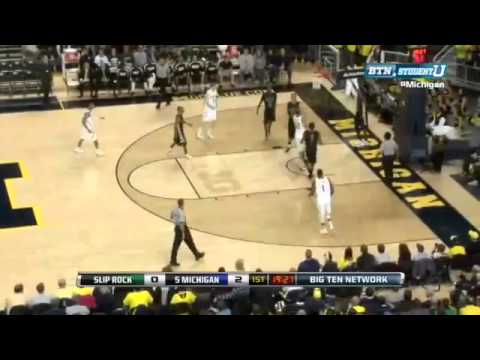 Michigan looked a bit lifeless to begin Friday’s game. Burke and Robinson both missed early jumpers and Slippery Rock was aggressive and built early confidence. Hardaway was the exception to the slow Michigan start. He opened the game with a great pass to Jordan Morgan for a smooth finish and then began looking for his own offense. Hardaway scored or assisted nine of Michigan’s first 12 points and helped stabilize the Wolverines as they worked out the early jitters in their season opener.

Hardaway’s quick start was a result of his individual off season improvement. The pick-and-roll pass to Morgan that was not only the correct decision but a smooth, quick look in the right spot. He also showed how effective he can be when he’s dominating the defensive glass. Hardaway got to the free throw line twice by getting a defensive rebound and then pushing the ball all the way to the bucket. The most noticeable difference in the junior’s game is his new found aggression on the defensive glass and it allows him to make things happen on both ends of the floor. His three point make came within the flow of the offense and the hot start undoubtedly helped propel him to his monster 25 point, 10 rebound performance.

It was great just to see Jon Horford on the court for the first time since early last December. After so much time off, including not practicing for the last two weeks, it was surprising to see Horford make such a quick impact. Horford checked into the game and rebounded a missed jump shot by Jordan Morgan, went back up and got fouled. He made the free throw and then took a charge on the ensuing defensive possession. Horford provides great front court depth and should improve significantly in the coming weeks as he gets back up to playing speed. With Morgan, McGary, Horford and even McLimans, Michigan’s big men should be able to play hard and aggressive without dire consequences for picking up fouls or running out of gas.

Michigan had grabbed a bit of control of the game, with a lead fluctuating between 5 and 10 points, but it was the Wolverine defense that finally helped extend that lead. Michigan held Slippery Rock to 0-of-5 shooting with two turnovers to fuel a 9-0 run late in the second half. Michigan called on an unlikely defensive hero. Blake McLimans played great defense while he was in the game, using his length to disrupt The Rock offense. McLimans had a block and a steal during the stretch and then hit a triple on the offensive end – the one thing you would expect with McLimans on the floor. McLimans sits far down the depth chart but there are undoubtedly times when he’ll be called on this year, thus far it looks like he might be able to make a few plays in limited opportunities.

4. Tim Hardaway Jr. extends the lead with a dunk and two triples

This was a vintage Tim Hardaway Jr. offensive explosion. A monster dunk to get his energy up followed by a pair of in rhythm three point shots. Hardaway’s confidence was surging and his offensive outburst widened the lead significantly and the Wolverines never looked back. Hardaway made his early reputation off of scoring runs just like this one that can transform the look of a game in a flash. His emotions can be a problem when he misses a few shots in a row but when he hits a few early shots, his confidence surges and he often times never looks back. His three point shot has always looked good but he’s had the results to match this season after going 5-of-5 from three point range in the opener.

The table was set perfectly for Michigan’s walk-on captain Josh Bartelstein to hit two free throws and push Michigan to the 100-point mark for the first time since 2007. He missed both and forced Max Bielfeldt to pick up his mess and tip in the free throw for the 99th and 100th points. Bielfeldt’s tip in was really symbolic of how well things went for Michigan in its season opener. Everyone was involved and every made plays when their number was called. Michigan’s 100 point performance was well deserved as while the game was fast (72 possessions), Michigan’s offense was still very efficient. Hardaway and Burke combined for 46 points but to have the other 54 points come from ten different players says encouraging things about Michigan’s depth.