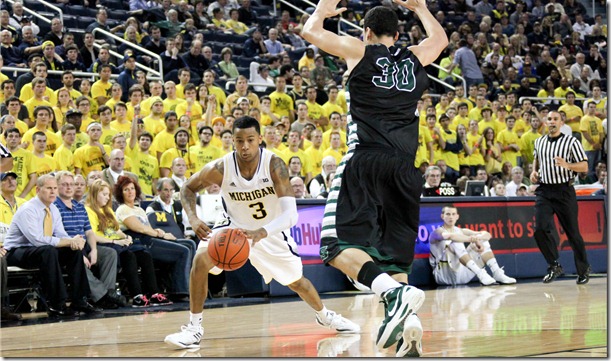 For about 10 minutes, Slippery Rock looked like a team ready to provide a challenge for No. 5 ranked Michigan. The Rock played physical basketball, didn’t look overmatched and hit some early shots to hang around. Eventually Michigan’s talent and depth was just too much for its Division II foe. The Wolverines stretched their lead as high as 42 points before reaching the century mark for the first time since 2007.

12 different Wolverines scored and three reached double figures in the dominating victory but Tim Hardaway Jr. was clearly Michigan’s star of the night. The 6-foot-6 junior scored 25 points on 8-of-10 (5-5 3pt) shooting and added 10 rebounds and three assists for good measure. Hardaway looked focused and confident from the outset and was nearly flawless in his junior year debut.

Pushing the pace caused a steep increase in interior shot attempts as Michigan attempted just 29% of its field goals from three point range. The Wolverine offense still made the most of its limited three point opportunities, hitting 12 of 19 (62%) triples, but also connected on 55% of its twos. Michigan rebounded over 40 percent of its missed shots but those figures were slightly inflated by McGary’s three self-miss offensive rebounds in one possession. It felt like the Michigan offense was somewhat loose with the ball but nine turnovers in 71 possessions is just a 13% turnover rate (well below last year’s average) and nothing to worry about.

Michigan’s defense was far from perfect, and there’s likely plenty of material for John Beilein to review in film sessions over the weekend, but Slippery Rock didn’t have the offensive mettle to make the Wolverines pay. The Rock scored .88 points per possession and shot just 40% on twos and 29% on threes. Slippery Rock rebounded 31% of its misses and was especially effective on the offensive glass early on. Lackluster defensive rebounding is an early red flag against a Division II team as the Wolverines will need to be much improved in this department against better competition.

Beilein’s rotation appears to be fairly established at this point. The starting lineup was unchanged and Stauskas and McGary continued to be the first options off the bench. The most notable development was that Beilein used Spike Albecht to spell both Burke and Hardaway. Albrecht replaced Burke but then stayed in the game when Burke was reintroduced in the lineup while Hardaway rested.

The most troubling development was seeing Michigan’s post players get into early foul trouble. Both Jordan Morgan and Mitch McGary picked up two first half fouls in quick succession (combining for 10 first half minutes). Jon Horford and Blake McLimans both impressed in their absence with an and-one basket and a made three respectively. Depth and physical play in the front court is a convenient luxury but is severely limited if Michigan’s bigs can’t learn to play without foul trouble.

The Wolverine offense is hitting on all cylinders and the defense isn’t far behind but Michigan still hasn’t beaten a Division I team. IUPUI (also fresh off of an opening win) and Cleveland State or Bowling Green are likely to pose a stronger threat next week but Thanksgiving and the NIT Season Tip Off can’t come soon enough as a first true measuring stick for this team.