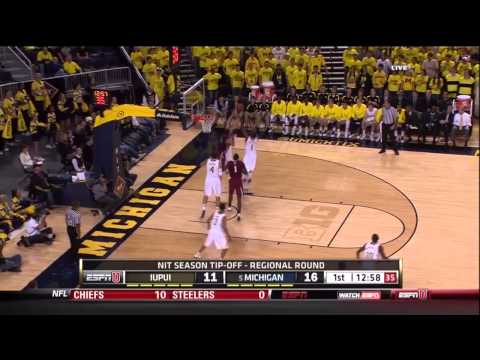 1. Glenn Robinson III makes it look easy in the first half

One of the most striking aspects of Glenn Robinson III’s game is how easy he makes everything look. His style of play exudes confidence and fluidity, and never has that been more clearly on display this season than in the first half against IUPUI. He started things off with a couple slams off of lobs, one off an out-of-bounds play and another off a back-door cut. The dunk in the paint comes off a basic give-and-go in which Robinson simply gets behind his man and Nik Stauskas is able to find him for the dunk. All of these plays show how Robinson gets his points in the flow of the offense — he doesn’t to dominate the ball to score. He just finds opportunities. As the season progresses and he gets more comfortable with the offense, he’ll get even better in this regard. As his confidence builds, his game expands with his comfort. Later in the half he pushes the ball off of a defensive rebound, clearly looking for a teammate in transition before burying a mid-range jump shot when no defender stepped up. With his confidence surging, Robinson added the final piece of the puzzle late in the half by knocking down a pair of three point jumpers – something that was a purported weakness during his high school days and has emerged as an early strength in his Michigan career.

The first half of this game was undoubtedly the toughest test the Wolverines have faced so far in this young season, which makes sense given that IUPUI is their first Division I opponent. Ahead by just ten points with under a minute left in the half after a pair of Glenn Robinson III free throws, Trey Burke took the game into his own hands to extend the lead. First, Burke executes a positively nasty crossover on IUPUI guard Jordan Shanklin to get by him and finish at the rim. While the level of competition needs to be taken into consideration, it’s this kind of play that reminds fans just how good Burke is. Burke, like most great point guards, lets the game come to him and focuses on creating for others but always has an extra gear to make a big play in a late shot clock situation.  On the last possession of the half, Burke creates offense from defense, stripping the ball from Shanklin, going coast-to-coast and drawing the foul at the other end. This play was a precursor to what Michigan would do in the second half — the Wolverines locked down defensively and ran all over the Jaguars after the halftime break.

In the second half, Michigan really turned it on defensively and forced IUPUI to take some bad shots. The Wolverines did a great job of rebounding the ball off of those misses, and the result was easy buckets. The first two plays in this sequence show Michigan’s ability to fill the lanes and create smart scoring opportunities — and both featured excellent facilitating by Tim Hardaway Jr. Hardaway’s game looks much more versatile this year, and these two plays are a perfect illustration of that. In the first play, he gets the ball from Jordan Morgan and waits until exactly the right moment to give it up to Burke for the score. If he is earlier or later on the pass, it’s a much more difficult play for Burke. On the second play, Hardaway rebounds the miss himself (one of his seven rebounds) and makes a Showtime-esque no-look dish to Morgan over the defense for the easy lay-in. Both terrific plays were started by Hardaway. Spike Albrecht got into the act with his own quick score, an impressive and-1 off a subtle screen from — you guessed it — Tim Hardaway Jr.

This is exactly what happens when you combine extensive experience with young athleticism. Jordan Morgan has displayed many ways in which his game has grown and matured since last season, and passing the ball is one of those areas. Morgan has incorporated more deliberately a solid 15-foot jumpshot that will be deadly when he’s running the high post. His rebounding looks improved. And here, he shows off his vision with a crisp pass on the money for Robinson. Robinson makes a good, hard back door cut while his defender is busy denying him the ball, which is a veteran move in and of itself. After faking the handoff to Albrecht, Morgan sees the cutting Robinson and nails him with a laser in stride. Robinson opens up these kinds of opportunities because of his versatility. He can work on defenders in the post, but they also have to guard him on the perimeter — the latter was what made this play possible. Robinson established himself as a threat from outside early in the game, opening up opportunities for back door cuts like this one.

5. Jon Horford dunks through a double-team

When Michigan fans talk about Jon Horford’s “potential,” this is what they’re referring to. Plagued by an unfortunate knee injury at this early point in the season, Horford has seen limited minutes compared to other bigs like Mitch McGary and Jordan Morgan. Now that he’s finally seeing some playing time, Horford is taking advantage. He saw a seam down the middle of the lane, took two quick, confident dribbles toward the hoop and elevated. Pretty simple — also pretty effective. Horford has the explosiveness and athleticism to make these kinds of plays, and John Beilein said that at times he looks like the best rebounder on the team. If Horford can continue to develop his playmaking ability, he will be a valuable asset to the team going forward. Beilein sees still more growth possible, however, saying he wants to see Horford shoot the 15-footer more to open up his game.