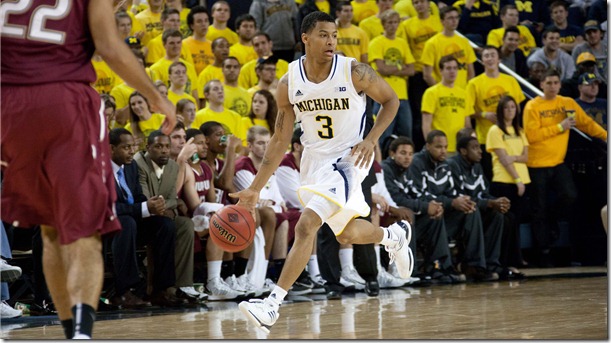 Michigan’s offense has been dominant throughout early season play and is showing no signs of slowing down. The Wolverines coasted to another easy victory on Monday evening, handling IUPUI by a final score of 91-54.

A year after winning just two games by 20 points or more, Michigan has already won its first two games by a combined 75 points. Blowouts can only tell so much but as of November 13th, the Wolverines look every bit like a top five team.

A balanced offense combined with a stifling second half defensive performance was enough for Michigan to pull away. Five Wolverines reached double figures and over half Michigan’s makes were assisted in the easy win. Glenn Robinson III had a career high 21 points (on just nine shots) and six rebounds while Trey Burke added 22 points and nine assists. Nik Stauskas (11), Tim Hardaway Jr. (10) and Jordan Morgan (10) also reached double figures.

Michigan’s offense showed no signs of slowing down. The Wolverines scored 1.31 points per trip, which was not quite enough to match their season opener but still a better per-possession output than last year’s team was able to produce over the course of a 34 game season. Michigan’s shooting effort was terrific – 59% on twos, 62% on threes, 72% eFG% – but this game didn’t have the feel of a herculean shooting night. The Wolverines shot the ball well but the shots came easily within the offense and were generally wide open. With eight made layups and eight dunks, almost half of Michigan’s made field goals came directly around the basket.

The Wolverine offense was great throughout the night but the defense didn’t get off to nearly as impressive of a start. IUPUI started the game on fire and Michigan’s defense left something to be desired. IUPUI scored 27 points on its first 22 possessions (an impressive 1.22 points per trip) and trailed by just four points with 7:03 to play in the first half – then the Wolverine defense woke up. Michigan held IUPUI to just 27 points on its final 47 possessions of the game which calculates to a dismal .57 points per possession.

Michigan won games last season because of discipline and toughness. This year it’s clear that they’ll win plenty due to sheer talent as well. This team’s toughness hasn’t been tested in a close game but the talent is blatantly obvious as Michigan continues to blow out inferior competition.

There’s no time for Michigan to rest as Cleveland State is still in town and a trip to New York City is up for grabs. The Wolverines host the Vikings, who topped Bowling Green in overtime, at 8 p.m. at the Crisler Center.