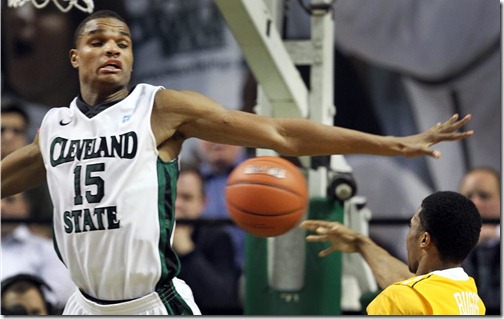 The best mid-major programs in college basketball are able to establish a consistent identity. Program culture, style of play and recruiting align under this identity and allow the program to maintain consistency. Cleveland State under Gary Waters is no exception to this rule. The names on the jerseys will change but you can routinely predict what kind of team Cleveland State will put on the floor each season. The Vikings will get after it on defense with an in-your-face pressure defense and while they’ll rarely be described as pretty, they are certain to be tough.

The Horizon League has emerged as a premiere mid-major conference in the Midwest and Cleveland State was the league’s best team last season on per-possession point differential. The Vikings are likely to take a step back with the departure of four starters but should be able to maintain their identity in 2012-13 with a number of promising returning pieces and a budding star in Anton Grady.

6-foot-8, 215 pound sophomore Anton Grady should be expected to emerge into a Horizon League star. He averaged 9 points and six rebounds per game, good enough for a spot on the Horizon League All-Newcomer team, while serving as the Cleveland State sixth man last season. He’s an active defender, accumulating steals and blocks, but is also a dominant rebounder on both ends of the floor. He’s effective enough on offense as well, connecting on 55% of his twos. He tallied 14 points, nine rebounds, three assists, three steals and three blocks in Cleveland State’s opener and should be more than comfortable in a starring role for the Vikings.

Sophomores Charlie Lee, Marlin Mason and Sebastian Douglas have stepped into the starting lineup after playing supporting roles in 2011-12. Lee is a creator but struggled with perimeter shooting (19% 3pt) and turnovers (30% TO Rate) as a freshman. He piled up 14 points, 10 assists, six rebounds and four steals in Monday’s overtime win over Bowling Green. Mason, a Detroit native, is a strong and aggressive wing rebounder that scraps to score around the basket at 6-foot-6, 210 pounds. Douglas (6-foot-4, 210 lbs) has impressed early on this season, averaging 13 points and five rebounds per game  to open the year.

Senior Tim Kamczyc hasn’t played a major role in the CSU offense early in his career but can convert the shots he takes, shooting 64% on twos and 46% on threes last season. Kamczyc was critical in Cleveland State’s Monday win over Bowling Green, hitting 5-of-10 threes en route to 21 points and seven rebounds. Lansing Sexton freshman guard Bryn Forbes has earned some early playing time off of the bench while Ludovic Ndaye will provide physical depth in the frontcourt at 6-foot-9, 240 pounds.

Cleveland State should serve as a better barometer for Michigan after two 30-plus point blowouts.  Pressure bursts pipes or forges diamonds and the Vikings could provide the toughest ball pressure defense that Michigan will see until it hosts Arkansas in December. Trey Burke should be fine in the turnover department but what about Tim Hardaway Jr. in a primary ball handling role at the two guard? Spike Albrecht, Nik Stauskas and Glenn Robinson III should also be challenged on the perimeter in ways that they haven’t seen in their careers. Michigan under John Beilein has been synonymous with low turnover basketball – generally with great results against pressure defense teams – but you never know how a team will react until they’ve passed that hurdle.

The Vikings’ win over Bowling Green was far from a thing of beauty (CSU shot 35% on twos) but they figured out a way to win by clawing back into the game and prevailing in overtime. Michigan has been playing nearly flawless offensive basketball but the Vikings are certain to be its sternest test to date. Cleveland State should likely be a borderline top-100 team by year’s end and provides a passable but intriguing challenge for the Wolverines. Ken Pomeroy projects a 70-57 final score with a 89 percent chance of a Michigan victory.