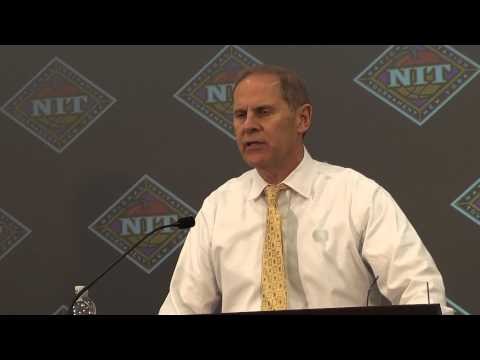 John Beilein talked to the media after Michigan’s 91-54 win over IUPUI discussing his freshman star Glenn Robinson III, All-American point guard and more. You can watch in the embedded media player below or read the quotes after the jump.


Opening Statement: “This is rare because the other teams can go home and rest but our guys have to be at their 8:30 classes tomorrow. So, it’s a challenge for us but we’re happy to get the win. Now we have a tough Cleveland State team tomorrow. The first half, there were some tough stretches there where I thought we were going to be in for a long battle. They were shooting the ball well, really running their stuff well, and guarding us very well — really putting pressure on us that we hadn’t seen yet. Once we got accustomed to it, we were fine. There were some adjustments we had to make, personally, just to get ready for that pressure.”

On Tim Hardaway Jr.: “He goes 5-for-5 the other night and he doesn’t shoot a 3 here. Sharing the ball. The unity we have on this team if good. He got a couple rebounds — he was way above the rim, just like the one alley drive he had with the dunk. What John Sanderson has done for him in our weight room is incredible, with all our guys. You see it right there. He wasn’t getting rebounds like that too often his freshman and sophomore year.”

On offensive efficiency: “The efficiency today was more about defense in the second half. We were in fast-break mode the whole time, we’re not giving up offensive rebounds because we do have some pretty large guys who can go in and get it, they outlet it well, and you got Trey (Burke) and Timmy handling the ball, that’s pretty good. That’s where most of our offense is coming from. We didn’t have great offense when we weren’t stopping them early. Once we started stopping them, then we were much better.”

On Trey looking for others more: “He understands all the things that are happening much better. He’s always looked for people, he’s never been selfish, but I think now he understands what could be open once he reads how they’re playing him.”

On possible fatigue tomorrow: “You’ve been practicing hard, you’ve got two teams going, with the carrot of New York City waiting for the winner. Hopefully we’ll get enough people through it. Both Michigan and Cleveland State will have to be very careful tomorrow about how long people play because two games back-to-back, no one’s used to that now and in fact you don’t have it all year long until the Big Ten Tournament.”

On what IUPUI was doing offensively in the first half: “They really spread us out with multiple ball screeners from the four and the five. They were giving us action that, I wouldn’t say is really unusual, some of the angles were unusual. Jordan Morgan was fine when he was in it, but he’s always got a freshman in there with him, whether it’s Mitch (McGary), Glenn (Robinson III), and then there’s usually another freshman in there trying to figure it out, and they were good at it.”

On Jon Horford’s health: “In the game, I wanted to use him more in the first half but Jordan was really playing well. I mean, he was turning those ball screens around on them that they were setting and giving us time to recover and he’s our best in that area so I wanted to keep him in there. (Jon) is doing fine, he needs more reps. He got the nice slam he had today, but I want him to shoot that little 15-footer, too and just keep moving the ball. He gets rebounds that tell me he may be the best on our team (at rebounding) at times.”

On the feel of a tournament atmosphere: “We were out there like we were playing one game. They know. Some of my past teams have been fortunate enough to get to the finals of the NIT in the postseason and in the preseason it’s special as well. They just want to get there. I think we’re really focused on what we’re trying to do.”

On all the alley-oops: “For the first time, we actually practice them now. Because I realized that it’s a really good play against help defense if you have athletes. They’re more spontaneous when they happen and we’ve thrown so many away sometimes that we actually have started to practice them more and get more confident. They are an important part of today’s basketball. Because of the great scouting that people have, it has to be right there, it has to be a quick pass otherwise there’ll be covered there.”

On Glenn Robinson III’s first miss of the game, in the second half: “He’s learning what he can and can’t do. He’s probably lamenting the turnover he had there, as well. He’s a very efficient player, as you can see. His team loves him, and they find him. What’s very impressive about Glenn has been his defense. He really buys in to playing defense, he’s been just a pleasure to coach. He has instincts, both offensively and defensively, that you just don’t coach. He just does it.”