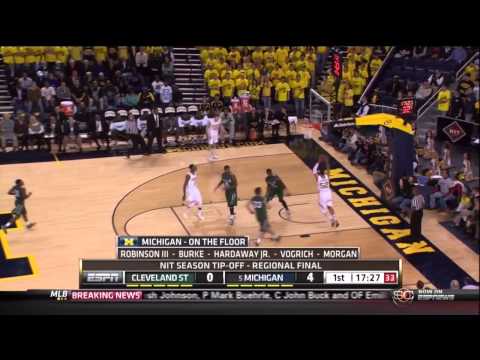 Michigan pounced on Cleveland State right from the opening tip, and never let up. The Wolverines scored the first eight points of the game in remarkably easy fashion. They mixed up the pace — two buckets came off of fast breaks, two off of well-run half-court sets. The important, and most striking common feature of all the baskets: they were all either layups or dunks. Every one was a result of a beautiful play that made the finish a formality. Trey Burke started things off with a breakneck crossover in the open court followed by an easy finish at the rim. Tim Hardaway Jr. showed his renewed focus on 2-point field goals by blowing by his defender from the 3-point line and gliding to the cup for a lay-in. On a textbook 3-on-2, Glenn Robinson III finds Jordan Morgan filling the lane late and Morgan finishes with a reverse. Finally, Hardaway penetrates and draws Morgan’s man out of the post, then dumps it to Morgan down low for the slam. This initial run was a big part of how Michigan simply overwhelmed Cleveland State in the first half and built an insurmountable lead by halftime.

2. Mitch McGary runs the floor, creates opportunities for himself and others

Michigan fans expected Mitch McGary to provide high-energy play and athletic mobility for a man his size, and so far he has delivered. The freshman was running the floor really well against Cleveland State, snagging rebounds and following his passes all the way to the hoop. He had a particularly impressive sequence early in the first half when he got a steal, dribbled down court and found Nik Stauskas on the perimeter in a position to drive. After Stauskas found the hoop, McGary hustled down the floor and took a charge on the other end. This sequence really encapsulates what makes McGary such an exciting young player — he can create defensive opportunities with his great hands and quickness, opportunities for his teammates with his vision, and he will always hustle back down the floor. On the successive two plays in the clip, McGary shows off his footwork and coordination. You always cringe when a 6-foot-10 player brings the ball down low in the paint as McGary did on his reverse lay-up off the feed from Hardaway, but in this case it worked to his advantage and gave him a better look at the basket. That’s a habit he’ll want to break come Big Ten season, however. McGary shows off excellent body control off the fast-break pass from Burke to keep the ball away from his defender and finish the play with a soft touch around the rim. McGary is getting better with every game, but one skill he seems to have down is filling the lane on a fast break.

3. Max Bielfeldt impresses in a few plays before the half

With Mitch McGary, Glenn Robinson III and Jordan Morgan taking most of the minutes at the big spots, we haven’t seen a whole lot from redshirt freshman Max Bielfeldt. Against Cleveland State, Michigan fans got to finally catch a glimpse of what he can provide: strong rebounding, defense and even a soft touch on a fadeaway jumpshot. Bielfeldt aggressively challenged Cleveland State guard Sebastian Douglas when he drove into the paint and deflected Douglas’ pass inside, which led to the steal by Matt Vogrich. His fadeaway jumpshot came off a rebound which showed good anticipation even though he wasn’t in great rebounding position. He grabbed a few more rebounds in the paint for good measure before halftime. Bielfeldt likely won’t eat up a huge amount of minutes this year, but he will be very useful to the team if he can provide a solid option John Beilein can turn to in the post when Morgan or McGary get in foul trouble. Bielfeldt seems to be well on his way to providing just that and perhaps more down the line.

4. Nik Stauskas fills it up

Nik Stauskas finished the game as Michigan’s second-leading scorer behind Tim Hardaway Jr. with 15 points on 5-of-6 shooting from the floor (3-of-4 from long range). Three of those bombs came in the second half. When you have a guy who can knock down 3-pointers on a consistent basis like Stauskas can, it provides a significant challenge for defenses for obvious reasons. With guys like Trey Burke, Tim Hardaway Jr. and Glenn Robinson III driving to the basket, a defender in charge of Stauskas finds himself in a no-win situation: either stay on Stauskas and don’t provide defensive help for your teammate, or help and leave Stauskas open for 3. This was the unfortunate decision facing Cleveland State forward Tim Kamcyzc when he helped on a Robinson drive, only to recover on Stauskas a bit too enthusiastically, fouling the sharpshooter as he buried the shot from downtown. One thing that was evident in Tuesday’s game, however, was that Stauskas wants to be more than just a shooter. He also did a great job of filling the lanes on the fast break and had several successful drives to the basket. Stauskas needs to get stronger with the ball and improve his ballhandling, but if Stauskas becomes more of a complete player, then decisions facing defenders get even more difficult.

5. Tim Hardaway Jr. continues to excel in his all-around game

Tim Hardaway Jr.’s stat line for this game speaks for itself: 17 points on 7-of-12 shooting with six rebounds and four assists. He is doing everything for the Wolverines right now. We’ll see what happens when Michigan starts playing major-conference opponents, but in this early part of the season Beilein’s common promise to run more seems to be actually true, and the uptempo style seems to be agreeing with Hardaway. Not only does he fill the lane, but he’s often the one starting the break off of a defensive rebound. His emphasis on rebounding means he can start the break immediately, and so far his vision, both in the open court and in half-court sets, has exceeded expectations. Hardaway has evolved into a do-it-all player for Michigan, and these two plays in the second half emphasize the fact that he is focused on much more than just being a shooter this season. His speed in the open court allows him to get by any defense, and the last play was just one example of his vision opening up opportunities for his teammates.