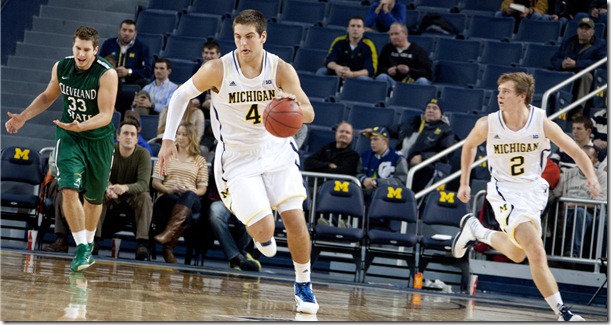 Michigan’s season kept on rolling on Tuesday evening as the Wolverines beat Cleveland State by a final score of 77-47. After winning its first three games by a combined margin of 105 points, Michigan couldn’t have started the season on a better note.

Michigan junior Tim Hardaway Jr. displayed his improved skill-set once again in scoring a game high 17 points to go along with six rebounds and four assists. Freshman guard Nik Stauskas was impressive in his own right, adding 15 points on 5-of-6 shooting off of the bench while Trey Burke was steady with 12 points and seven assists.

The Wolverines jumped out to an 8-0 lead, which ballooned to 28 points at halftime, and controlled the game throughout. With the win, Michigan punched its ticket to New York City for a NIT Season Tip Off semifinal match-up against Pittsburgh on Wednesday, November 21st at 9:30 p.m. on ESPN2.

Michigan’s primary recipe for success was unchanged from earlier tilts. The Wolverines excelled by grabbing clean defensive rebounds and pushing the tempo. The strategy worked flawlessly in the first half as Cleveland State shot just 4-of-15 on twos and 2-12 on threes while Michigan rebounded 95 percent of those missed shots. Cleveland State salvaged just two points in the final 11:43 of the first half and easy offense snowballed for the Wolverines. Michigan led by 28 at the half after holding the Vikings to just .41 points per trip in the first stanza. For all intents and purposes the game was decided after 20 minutes and before Cleveland State managed a more respectable offensive output in the second half.

The Wolverine offense scored 1.22 points per trip and continued to get easy looks from the field. Michigan made 21-of-35 (60%) twos and 9-of-24 (37.5%) threes for a 58.5% effective field goal percentage. The Wolverines only turned the ball over on 16% of their possessions against Cleveland State’s aggressive defense. Michigan’s depth and balance was on display as four players reached double figures and 10 notched the scoring column.

Through three regular season games and two exhibitions, the two posts experiment still has a ways to go. Michigan has flirted with two posts but not for more than 10 minutes per game at this point. Glenn Robinson III has been tremendous at the four which makes it hard to justify taking him out of that spot. While McGary is somewhat versatile in the open court, none of Michigan’s bigs do one thing consistently well enough offensively (notably score on the block or pass from the high post) to justify playing two of them together for significant periods of time. The experimenting will continue, especially against more physical teams, but there’s plenty for John Beilein to figure out in that regard.

For Michigan, the easy part is over. Next Wednesday’s match-up (9:30 p.m., ESPN2) with Pittsburgh will be the first legitimate test. Pitt has impressed in early season play and last year’s disappointing season appears to be an aberration for Jamie Dixon’s team. The Panthers have a physical front line that can get after it on the offensive glass and will challenge Michigan’s recipe for success this far.