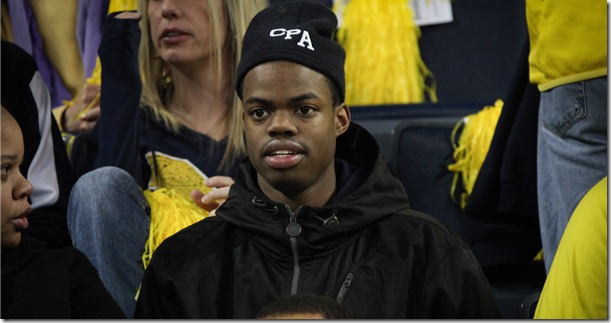 When Derrick Walton was about four years old, he would go to basketball games at Kettering High School, where his dad, Derrick Walton Sr., coached. The younger Walton would often wander onto the court during halftime and put up jump shots.

“He used to shoot jump shots at halftime and he would shoot 3-pointers at 18-19 feet when he was a four-year-old,” Walton Sr. said. “It wasn’t a cheerleader thing, it was just him shooting.”

At a very young age, Walton showed an affinity for the game that would lead him from Detroit’s Chandler Park neighborhood to the University of Michigan. In a prophetic coincidental twist, there was a young assistant coach just starting his career at the University of Detroit Mercy who would drop by Kettering to scout prospects.

That coach, of course, was Bacari Alexander, current Michigan assistant coach and the primary recruiter for the Wolverines in the city of Detroit. Alexander couldn’t have known it then, but while he sat in the stands at Kettering all those years back, the best recruit on the floor was that four-year-old shooting jumpers at halftime.

Walton picked up an offer from Michigan on the first day that John Beilein offered prospects in the class of 2013: June 15th, 2011.

“It was exciting. When I got that call, I pretty much knew what was going to happen,” Walton said. “It was great to just hear it from their mouth and then once I heard it, it was like no feeling I ever felt before. It was just really exciting.”

But it was only the beginning of what would turn out to be a high-pressure recruitment for Walton. Walton was one of the best point guards in the area, but he had competition: Monte Morris, a talented point guard from Flint, was also being hotly pursued by Michigan.

The Michigan coaches needed to know if they were going to be getting a point guard in the 2013 class. So the Wolverine staff offered both prospects – and Demetrius Jackson down the line – waiting to see which prospect would jump at the offer.  At first this deterred Walton and threw into doubt whether or not Michigan was the right place for him.

“At first, it steered me away from them. It was like, it kind of turned me off a little bit, the whole situation,” Walton said. “I was thinking that maybe this school wasn’t for me.”

Not only was Michigan putting the pressure on, but Michigan State was showing renewed interest after Walton received the offer from the Wolverines. The added pressure reached a head when Walton made a trip to East Lansing to meet with Michigan State coach Tom Izzo.

Walton downplayed the “battle” between in-state schools that many perceived, coming to the realization that Michigan was the place for him.

“Most people thought it was a battle between those two,” Walton said. “But, I mean, honestly I was just taking it all in and Michigan ended up being a better fit for me.”

After the visit, Michigan State wanted him to come back to East Lansing to receive an offer. But by the time the Spartans asked Walton to make the second visit, he had already informed his dad that he was going to be a Wolverine.

“(Michigan State) called me back and they said they might want him to come up for another visit, and they wanted to offer him,” Walton Sr. said. “But we didn’t give them the chance to offer him because Derrick said, ‘Dad, I’m not going up there, I’m going to do this right here.'”

Michigan’s ability or inability to recruit the city of Detroit has long been debated since John Beilein took over the program in 2007. When Walton arrives on campus for his freshman season, it’s likely that he’ll be one of three players from the state of Michigan on the Wolverine roster. Only Walton and Morgan have roots in the city of Detroit.

Despite those numbers, Walton senses that Michigan’s recruiting presence in Detroit is still very strong.

“A lot of kids want to go to Michigan, to be honest. Michigan has a big effect on the high school kids,” Walton said. “A lot of guys from Detroit can actually play. So you always want to keep up ties with the city.”

Walton’s father articulated what has become a common perception among Michigan fans since the Fab Five era.

“I heard something from my colleague at work, he said Michigan is trying to be the Duke of the north,” Walton Sr. said. “Meaning, they’re getting good, quality kids, from good families. You know, Manny Harris was our last kid from Detroit. Hopefully that trend can keep going and they can keep getting Detroit kids.”

Walton Sr. expressed a strong hope that Michigan will continue to recruit Detroit and pull good players from the city. He sees one major reason to keep that hope: Bacari Alexander.

“When coach Beilein hired Bacari — Bacari is a Detroit kid, an inner-city kid,” Walton Sr. said. “His main goal was to go recruit some of the best kids in Detroit, who can fit that Michigan thing. ”

Walton has separated himself from the pack through his indomitable work ethic and his ability to step up in big situations. According to his father, Walton is in the gym every morning at 6:30 to get shots up before school. He has been working with a strength and conditioning coach to make sure his 6-foot frame is ready to bang around the basket, where the bulldogish guard likes to score most of his points. His jumpshot, once a weakness, is becoming more and more consistent thanks to a concerted effort on Walton’s part to improve.

Despite lofty rankings and the talk of a possible Mr. Basketball award at the end of his senior season, Walton Sr. still makes sure to keep the competitive fire under his son flickering.

It seems to be working. This summer on the AAU circuit, Walton — even though he had already committed to Michigan — played with something to prove. Walton’s crowning achievement in a summer full of them was earning tournament and championship game MVP honors at the Adidas Super 64 in Las Vegas – one of the premiere events on the summer circuit. Walton was dominant, with a fully-stacked stat line of 16 points, 13 assists and seven rebounds in the championship game.

Walton has already had a very successful high school and AAU career. His motivation going into his final high school season is three-pronged: his father’s consistent reminders that the talented guard doesn’t get the respect he’s earned, the success of his Chandler Park Academy team in the state tournament, and that one award coveted by every basketball player in the state of Michigan: Mr. Basketball.

“It was an award I’ve always wanted ever since I knew about it, probably in eighth grade,” Walton said. “It means a lot to me.”

Michigan has become a veritable “Point Guard U” in recent years, with former Wolverine and current Los Angeles Laker Darius Morris leading the way in 2010-11 and current Michigan point guard Trey Burke excelling in his freshman year last season. Walton appears to be next in a line of truly impressive lead guards for the Wolverines.

“It’s exciting to know that I’ll possibly be the third,” Walton said. “It’s big shoes, but I think I can handle it.”

Walton appears to have all the tools to follow a daunting point guard legacy. He has great vision and is Iverson-esque in the way he relentlessly attacks the basket. For his part, Walton is excited to begin his journey with Michigan after his senior year.

“I know for a fact I’m going to come in and work as hard as possible so I can be successful early in my career,” Walton said.

It’s been a long road from his days of shooting jumpers at halftime of Kettering games, but Walton Sr. said his son has everything he needs to excel in the college game.

“Michigan is getting a good kid. He’s humble, he’ll work hard, he gets good grades,” Walton Sr. said. “He is a tremendous kid. He can do whatever a coach would ask.”