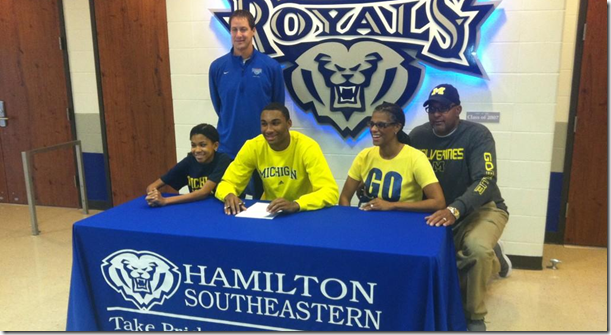 Zak Irvin, Mark Donnal and Derrick Walton are officially Michigan Wolverines. The trio of 2013 prospects made their commitments official this week by signing letters of intent. Donnal and Irvin signed their letters on Wednesday while Walton signed his at his school on Friday afternoon.

Michigan’s recruiting class is regarded as top-15 nationally in the class of 2013 and all three future Wolverines are consensus top-100 prospects. Irvin ranked 29th, Walton 45th and Donnal 97th.

The Michigan basketball program released a statement with quotes from John Beilein on all three future Wolverines. Here are Beilein’s comments on the class.

“We are excited Mark, Zak and Derrick have joined the Michigan Basketball family,” said Beilein. “These are three young men coming from outstanding families with strong academic backgrounds. They are very talented young men who also value being great teammates. They will fit right in as we continue to build a positive culture within this basketball program.”

Individual comments after the jump. On Zak Irvin:

“We have been tracking Zak for four years now and it has been incredible to watch his overall development,” said Beilein. “He possesses the ability to play any perimeter position. He is an outstanding defender and shooter and really loves to compete. We are looking forward to coaching him because of his versatility, length and attitude.”

“We have loved Mark’s potential from the first time we saw him,” said Beilein. “He is very skilled, has the ability to shoot, and is very young, so he will grow into his body. We like the idea that he is a developing big with a very high ceiling. At 6-9 he will be tough enough to play center and skilled enough to play as a stretch power forward.”

“Derrick’s excellent point guard skills and natural leadership will make him a great addition to our roster,” said Beilein. “His outstanding court sense tells him when to pass or score. He sees the floor extremely well on both offense and defense. His teammates will love playing with him because of his team-first attitude.”