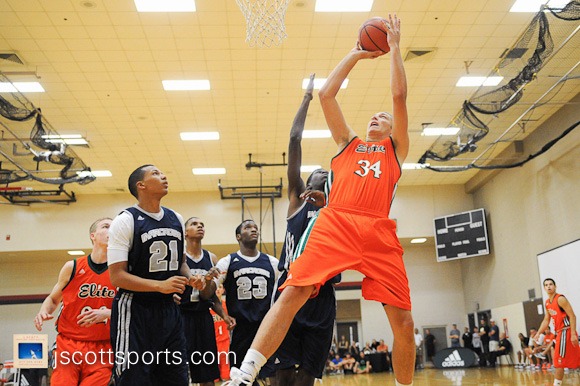 North Carolina won the NCAA tournament in 2005, but one of the more compelling stories of that year’s tournament centered around a team that didn’t make it out of the Elite Eight. Current Michigan coach John Beilein’s West Virginia Mountaineers fielded a team featuring two incredible shooters: one was Mike Gansey, a 6-foot-4 guard. The other was a 7-foot behemoth covered in tattoos. His name was Kevin Pittsnogle.

You probably remember that team. Pittsnogle led the Mountaineers past Texas Tech in the Sweet Sixteen in 2005 with his smooth, effortless 3-point shot, his nifty footwork in the post and his massive frame protecting the basket.

From that point on, when people thought of John Beilein’s ideal big man, they thought of Kevin Pittsnogle: a player who could play both facing up and with his back to the basket, with good mobility and a knock-down 3-point shot.

2013 Michigan commit Mark Donnal isn’t a seven-footer; he’s 6-foot-9. He also doesn’t have any tattoos or a name that is easily converted into a verb. But he does have an above-average back-to-the-basket game, a killer jumpshot from the perimeter and he runs the floor like a deer – in short, everything John Beilein looks for in a post player.

“(My AAU coach) has compared me to (Pittsnogle),” Donnal said. “I never really got to see him play, but I’ve heard people compare me to him. I’m a post player, but also I can step out and hit a three or a jumper outside.”

This will be the first time during John Beilein’s tenure at Michigan that he will have at his disposal a player with the unique set of skills he looks for in big men. DeShawn Sims was a great player, but his handle and 3-point shot developed late in his Michigan career, thanks largely to Beilein’s coaching. Jordan Morgan is a solid contributor, but no one is going to mistake him for Dirk Nowitzki. Mitch McGary comes the closest to a Pittsnogle type, but lacks the effective outside jumper, instead focusing on rebounding and post play.

And it may never have happened without timely recognition of his talent by a man who would later become his varsity high school basketball coach.

When Bryan Borcherdt coached the eighth-grade Mark Donnal, he noticed something unusual about his development.

“As he grew, he never went through that awkward phase that most big guys do,” Borcherdt said. “He always was very coordinated, he always had great hands .”

Donnal excelled as an eighth-grader playing against middle schoolers, but he soon graduated from Borcherdt’s team and moved on to Anthony Wayne High School. Borcherdt, at that time, was not coaching at Anthony Wayne. But he wandered over to one of Donnal’s games during his freshman season. What he saw was a player who had a chance to be great but who didn’t quite realize it.

“I just said, “This kid’s got ‘It.’” He’s got this God-given ability that needs to be channeled and needs to be worked with,” Borcherdt said. “So, I got in touch with his parents and told them if there’s anything I can do to help him, let me know.”

Borcherdt reconnected with Donnal and began working with him on his game whenever Donnal could spare the time. A former college player himself, Borcherdt taught Donnal how he could use his size effectively in the post as well as how he could use his length to get up jumpshots against shorter opponents. Donnal worked with Borcherdt on all aspects of his game. Donnal progressed, but Borcherdt thought his star pupil was holding something back. So during one of his workouts, the coach asked Donnal a pointed question.

“I asked him, ‘Where do you see this going?’ and he had a couple answers.”

“At that point, I wasn’t getting much college interest and obviously he knew the potential that I had as a young freshman and he asked me where I wanted to be – mid-major player or high-major,” Donnal said. “And I said mid-major because that’s what I thought I had the potential to be.”

“I told him, ‘You’re crazy if you don’t think this can go as far as you want it to go,” Borcherdt said. “With your skill set and what God has given you, if you work your butt off, you can go anywhere and do anything.’

“Not everybody even has that ability or even that choice. At that point, I started pumping into him that you don’t need to look at settling for going to a place. You can set your sights on major college basketball and go after it.”

This conversation clearly had a strong impact on Donnal. The young big man started seeing his game in an entirely new way. According to Donnal, it drastically shifted the goals for his basketball career.

“Yeah, it definitely gave me a lot of confidence just knowing that he believed in me, being a former college basketball player himself,” Donnal said.

Alongside his development in the high school off season with Borcherdt, Donnal began playing AAU basketball for Indiana Elite. When Donnal hit the AAU circuit, he found himself in a much different world than the structured, systematic offenses and defenses he was a part of at Anthony Wayne. Big men can often get lost in AAU games because there is so little focus on running a post-centric offense – or any offense at all, for that matter.

Donnal also found himself coached by a national basketball celebrity – Dan Dakich, the former Indiana player and coach. Dakich’s son Andrew was the point guard for Donnal’s team. While the Dakich-coached Indiana Elite team occasionally dumped the ball in to Donnal, AAU was mostly a time for Donnal to hone his outside jumpshot.

“Well, he can shoot. That’s first and foremost. He’s a good screener and pop shooter.  Not a lot of guys are,” Dakich said in an interview with UM Hoops this July. “A lot of guys can step up and shoot, but he can set a ball screen, pop, set a side ball screen and pop, and he’s getting better on the block.”

Dakich was quick to share his opinion on Donnal, which Donnal said is no surprise.

“There is no difference,” Donnal said when asked if Dakich the coach differed from Dakich the radio host. “He is not afraid to say what’s on his mind. He is always straight-up and forward with you.  He’s a character. He’s a really funny guy.”

As Donnal’s game continued to improve, the conversation he had with Borcherdt began to prove more and more prophetic. Donnal received interest from Butler and Michigan, and even a sidelong glance from Indiana.

Finally, on June 15th of 2011, Borcherdt’s prediction that if Donnal put in the work, he would go to a high-major school came true. Donnal had put in the work, and Michigan called with an offer.

Donnal accepted on the spot.

For Donnal, his decision to go to Michigan was an easy one. It was love at first visit, so to speak.

“(I knew I wanted to go to Michigan) as soon as I stepped on campus, I think,” Donnal said. “All the renovations are really nice, and coach Beilein’s getting a lot of really good players in the program. When I talked to them, it was an easy pick for me.”

He had the support of Borcherdt as well as his family. Donnal was a Wolverine.

Of course, his game still needs improvement. And for Donnal, the same thing that kept him from initially believing he was a high-major player is the only thing limiting him on the court.

“It’s just that kind of killer mentality that you have to have as a player,” Borcherdt said. “The, ‘I’m gonna be the predator not the prey.’”

But Borcherdt said Donnal is improving his aggressiveness – in an early-season scrimmage, the coach tabulated 44 points for Donnal, 16 in one quarter alone.

Donnal may have needed some convincing of his own ability, but once he was convinced he ran with it. Donnal may have considered himself a mid-major player, but Borcherdt, as well as John Beilein, saw a serious high-major prospect. Because of both of their belief, Michigan may have found the ideal post-man specimen for Beilein’s nuanced pick-and-roll offense.