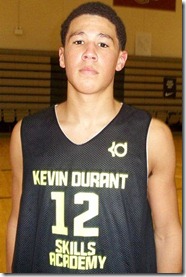 The UM Hoops Mailbag is a collection of questions tweeted to us via Twitter (@umhoops), e-mailed to us or sent via our Facebook page. Submit your questions and we’ll answer as many as we can.

@jlustig22: What do you foresee the make-up being of the 2014 class? Now that Keita Bates-Diop and Jae’Sean Tate have picked Ohio State, does that alter their strategy & offers?

Both prospects are big losses. Make no mistake about it. Michigan spent a significant amount of time tracking Jae’Sean Tate and especially Keita Bates-Diop this summer on the AAU circuit. Both players would have been great fits. Bates-Diop as a perfect stretch four with NBA potential and Tate as an aggressive and attacking player that could play the two, three or four.

That’s the bad news. The good news is that there’s still plenty targets and time remaining. Devin Booker and Trevon Bluiett are now Wolverine priorities as the only offered prospects left on the board. Michigan is in a strong position for Booker and Bluiett but neither prospect seems to be in any hurry to make a decision. Booker has slowed things down while Bluiett has discussed taking official visits in the winter – something allowed for 2014 prospects by new NCAA legislation.

The next tier is where you could see some reaction. Florida big man Ricky Doyle and Ohio swingman Vincent Edwards should be next in line. I’d expect both prospects to receive an offer when they set foot on campus but figuring out when that might be is difficult. Edwards has rescheduled trips to Ann Arbor multiple times while Doyle doesn’t plan on taking unofficial visits due to cost. The lack of a visit for Doyle shouldn’t be a major concern as the Wolverines have made a strong impact there but until he takes visits it’s unlikely that there will be any major movement in his recruitment. Edwards would be a great fit as a versatile big forward, but Purdue is also heavily involved there (and is also reeling from the loss of Keita Bates-Diop). – Dylan Burkhardt

Doing the math based on Ken Pomeroy’s predictions you end up with right around 16%. With games against Pittsburgh, North Carolina State and possibly Kansas State in the next week, we’ll probably be able to say by the end of December. This team has some experienced options, but its also a young team. Would it be shocking if they have a let down somewhere along the way? Probably not. I’d put the baseline at right around 20% if I had to project because it’s tough to go much higher until we’ve seen the Wolverines match-up against a high-major school.  – Dylan Burkhardt

@gwizzy22: how long until we see Nik Stauskas in the starting lineup?

First off, Stauskas is averaging 23.3 minutes per game to Vogrich’s 17.7. Stauskas comes off of the bench but he’s playing more minutes and scoring more points (11 to 3). John Beilein has routinely mentioned how well he likes to have a shooter and scorer coming off of the bench and, right now, Stauskas fills that role perfectly.

Early in games, Michigan is going to go to its horses. That means Trey Burke and Tim Hardaway Jr. are going to be getting the ball. By checking in off of the bench, Stauskas’s minutes will come when some of Michigan’s primary scorers might be getting rest or at least wearing down. The change of pace can provide better opportunities for everyone involved.

If Michigan’s starters begin to struggle early in games or Vogrich falls into some sort of prolonged slump, then perhaps we’d see an adjustment. As things stand now, I wouldn’t expect any immediate change. Stauskas is playing more minutes and playing well, even if he’s not named a starter. – Dylan Burkhardt

@jkacz24: chances of a big ten team winning it all this year?

The Big Ten seems to have four teams that are legitimate NCAA title contenders and while its way too early to project, if all four teams have seasons like many expect the league should be the most likely to bring home a national title in the country. Just look at the teams at the top: Indiana is the no. 1-ranked team in the nation, while Michigan and Ohio State seem to be neck-and-neck behind the Hoosiers, with Michigan State not far behind. Indiana has an excellent chance of taking home the ‘ship with its combination of size, 3-point shooting and athleticism. The Hoosiers also have experience in the NCAA tournament after going to the Sweet Sixteen last year. Ohio State went to the Final Four, and while they lost Jared Sullinger and William Buford, the Buckeyes retain DeShaun Thomas and Aaron Craft. One thing Michigan lacks that those two teams have is significant big-game NCAA tournament experience, but the Wolverines seem to have all the talent they’ll need to go deep in the tourney. There are plenty of reasons to think any of these teams have an excellent chance to go to the Final Four, and that’s leaving out the Spartans, who have an uncanny ability to win games in March.

That being said, a lot can happen in the course of a season and there are a bunch of really good teams out there from the other power conferences. The Big Ten probably has the best shot out of any of the conferences to crown a national champ, simply because of the immense talent and stellar coaching at the top tier of the league. – Joe Stapleton

@umhoops In terms of recruiting, is the increased athleticism this year an anomaly or will it start to be a trend?

I believe the recruiting success Michigan has experienced of late will continue. A quick glance at the class of 2013 with Derrick Walton (quickness) and Zak Irvin (length and above average athleticism) combined with Mark Donnal’s versatility is another sign of progress. Continuing recruiting momentum is contingent on two factors:

The brand-new facilities have done a lot to heighten Michigan’s profile among recruits. These buildings are not only ritzy but show the school’s commitment to basketball. However, it is the above-mentioned factors – combined with early talent identification –  that are critical to continued recruiting success. – Joe Stapleton