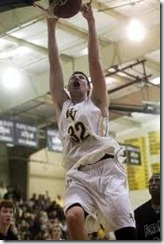 Thanks to the verbal commitments made by Jae’Sean Tate and Keita Bates-Diop to Ohio State over the weekend, Michigan is expected to move onto the next tier of 2014 players on its recruiting board. One player Michigan will certainly be keeping an eye on is Fort Myers (Fl.) Bishop Verot center Ricky Doyle. Doyle, who stands just short of 6-foot-10 and weighs 235 pounds, emerged as a legitimate Michigan target over the summer and began his junior high school season with a bang on Tuesday night.

Doyle scored 28 points and grabbed eight rebounds in 28 minutes of court time during his team’s season-opening 62-60 loss to archrival Fort Myers. He showed off a dominant back-to-the-basket post game, knocked down some mid-range jump shots and even smoothly attempted a 3-point shot in rhythm in transition. He did all of this despite having the flu, which he said after the game he has been fighting for the last four days.

He scored the game’s first three baskets all in different ways. He knocked down a 16-foot jump shot with a hand in his face, grabbed an offensive rebound and scored on a put back and used an up-and-under move and finished off the glass. Doyle’s coordination and athleticism have improved tenfold since his sophomore season as he has put on more weight and become more comfortable with his frame. He spent much of the first half guarding a 6-foot-4 wing player on the perimeter and did not allow him to drive to the lane once.

Fort Myers also tried to challenge Doyle with drives and get him in foul trouble when Verot switched to a 2-3 zone defense in the second half. He showed a good understanding of the principle of verticality while defending and seems to realize that he is better off not trying to block every shot that goes up in the lane. He is not your prototypical shot blocker by any means but he makes up for that by understanding where he needs to be on the floor to alter shots and stay out of foul trouble.

Doyle would not be the first Viking to play for Michigan as former Verot guard Reed Baker signed with Tommy Amaker in 2006.

“It’s good being noticed for all the hard work I’ve put in,” Doyle said. “It’s fun to be noticed but I am just concentrating on helping my team and getting better. Hopefully, we can go to states this year. Recruiting…I will start thinking about that at the end of the season.”

“They changed it now so you can start earlier,” Richard Doyle said of taking official visits. “That opens up some things for the spring. We are still going to have to start narrowing it down.”

“He gets the most mail in the whole school,” Richard Doyle said. “It seems like every day there is a new school. It’s kind of overwhelming for him.”

With the mailbox overflowing, it is the calls and schools coming to watch him play that are making an additional impact on the family, Richard Doyle said. Without being asked about Michigan, Richard Doyle discussed how phone calls from John Beilein fall into that category. He also mentioned Miami and hometown Florida Gulf Coast have made an impact in that regard.

It’s easy to see why Michigan is recruiting Doyle as he appears to be a pretty good fit as a post player in John Beilein’s offense. He has an excellent post-up and face-up game, is athletic enough to rebound and is a good fundamental defender. He came to Bishop Verot as a 6-foot-8 freshman two years ago lacking much of the athleticism and coordination that was on display on Tuesday. He has worked with Vikings coach Matt Herting and his coaching staff to improve in those areas. Many of Coach Herting’s former players who have gone on to play Division I basketball have made their biggest jumps athletically the summer before their senior years. If that recipe holds true with Doyle, he may be the highest ranked basketball recruit ever to come out of Southwest Florida (a list that includes former University of Florida guard Teddy Dupay).

When Herting and Richard Doyle were asked who was showing interest in Ricky, each mentioned Michigan before naming any other program. That, along with Richard Doyle specifically mentioning Coach Beilein’s phone calls, would seem to indicate Michigan is in pretty good position with Ricky. Ricky does not have an offer from Michigan as John Beilein does not offer prospects that have not yet been on campus.

While Tate and Bates-Diop made their decisions quickly, don’t expect a quick decision from Doyle until he’s had a chance to take some official visits. When Doyle does begin taking visits, expect Michigan to be receive an official visit and sit near the top of his list.