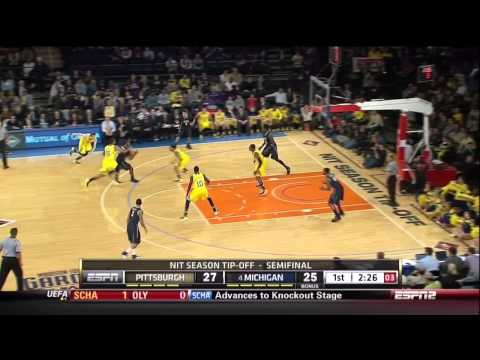 In order to win this game, Michigan had to make up for a sub-par defensive performance in the first half. Pitt deserves credit for running pick-and-roll action that Michigan didn’t seem ready for, but the Wolverines’ perimeter defense left something to be desired. These four plays illustrate some areas of the game Michigan struggled with early. The first two baskets by the Panthers, one a 3-pointer and the other an inside layup off an assist, were direct results of guard penetration by Pitt. On the 3-pointer, Tim Hardaway Jr. allows Lamar Patterson get by him, forcing Nik Stauskas to help off of Cameron Wright. Patterson gets the ball to Wright, who knocks it down. On the lay-in, Patterson again gets penetration, which draws the attention of Hardaway and Glenn Robinson III, allowing J.J. Moore to slip behind the defense for the easy two. The next play is a good example of the kinds of pick-and-rolls that gave Michigan fits in the first half. Jordan Morgan comes out on the pick but is late recovering, while his man, Talib Zanna, cuts to the hoop and finishes off a nice dish. This 9-0 run gave the Panthers a solid lead, but one that Michigan cut into significantly by the closing seconds of the first half.

2. The freshmen get their feet wet

Michigan’s highly-touted freshmen played some key roles in this victory. Nik Stauskas and Glenn Robinson III had 13 and 15 points, respectively, while Mitch McGary provided two points but some big rebounds and a couple steals. All of the freshmen ran into some snags, but overall their efforts certainly combined for a net positive. Here we can see McGary, Stauskas and Robinson making big plays in the first half and putting their respective stamps on the game – in their first halves of basketball away from Ann Arbor. Stauskas came in and knocked down the first 3-pointer he took, from the baseline. Glenn Robinson III made a spectacular block on Dante Taylor, who has a full three inches on Robinson. This is exactly the kind of play that only a player with the length and athleticism of Robinson can make. On the last play in the sequence, McGary scores his only two points in style. After displaying his consistent knack for getting steals while hedging on the pick-and-roll, McGary keeps the ball away from his only defender while gliding to the basket for the finger roll.

3. Michigan goes on 9-0 run midway through the second half

This was the point in the game when the tide really turned in Michigan’s favor. In the stretch from the 11:39 mark in the second half until Pitt’s time-out with 7:03 left in the game, Michigan went from being down five points to the Panthers to securing a four-point edge — a lead they wouldn’t surrender for the remainder of the night. The orchestrators of this run were the NBA Progeny Pair: Tim Hardaway Jr. and Glenn Robinson III. Robinson starts things off with a big-time 3-pointer with Dante Taylor’s hand in his face. From there, Tim Hardaway channels his father and crosses up Cameron Wright to the point where the Panther guard is completely turned around while Hardaway finishes an extremely tough layup with his left hand. Hardaway wasn’t hitting his shots on Wednesday, and it was great to see him continue to look for his opportunities elsewhere in the second half, rather than simply continue to chuck 3’s. Hardaway made a very savvy move to get himself to the line, catching his defender with his hands down and forcing the issue when he went up to shoot. Meanwhile, in the last play of the sequence, Robinson’s jumper continues to improve along with his confidence as he pump faked, stepped in and buried a long two.

4. Michigan crashes the offensive boards late in the game

Michigan didn’t shoot the ball well on Wednesday, but what made this game so different from games past is that the Wolverines rebounded over 30 percent of their misses. Michigan did an excellent job crashing the boards at both ends of the floor, rebounding 81 percent of Pittsburgh’s misses along with its excellent offensive rebounding rate. At no point was this advantage more striking than late in the game with the outcome still in the balance. In a Michigan possession that lasted almost a full minute, Mitch McGary comes down with an extremely impressive one-handed offensive rebound while tangling with Steven Adams for position. He gets the ball out to Nik Stauskas, who drives to the hoop but misses a layup. However, Glenn Robinson III is there to clean it up and winds up with the crucial tip-in to put Michigan up six. Later, Jordan Morgan comes up with a big offensive rebound of his own. Michigan owned the glass against a good rebounding team in Pitt — something we didn’t see much of last season.

5. Michigan uses the 1-3-1 zone to get key stops down the stretch

You can’t talk about Michigan’s defensive effort in this game without talking about the Wolverines’ effective implementation of the 1-3-1 zone. Although John Beilein has moved away from it as a focus of his defense, he used it perfectly in this game, and it really stymied the Panthers in the second half. While Pitt gets a quasi-open look from the perimeter in the first play of the sequence, the Panthers were clearly uncomfortable and hesitant about where to go with the ball — not to mention the look came off a dangerous cross-court pass. In transition, when Michigan didn’t have time to set its defense, Trey Burke contests a layup well without fouling and Michigan picks up the defensive rebound and Tim Hardaway Jr. is able to finish the fast break at the other end. The next play in the sequence is the 1-3-1 run to perfection. One of the objectives of that zone is to make players appear open when they really aren’t — at first glance, it may have appeared that Dante Taylor had room in the post, but Trey Burke and Glenn Robinson III collapse on the ball to force a turnover. Michigan made all of the plays it needed to make at the end to win this game and a big part of that was playing defense and coming down with key rebounds.