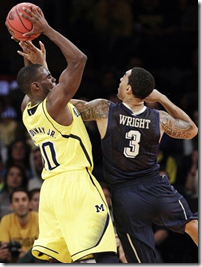 Michigan’s first three games provided little challenge and proved little more than the fact that Michigan now has the athleticism to overwhelm weaker opposition. Wednesday’s 67-62 win over Pittsburgh was a reminder that this new-look team has toughness too. Pittsburgh trotted into Madison Square Garden with a bigger lineup and plenty of talent but Michigan took the Panthers’ best shot on the chin before regrouping and knocking off the Panthers.

For the first time this season, John Beilein’s team played with its back to the wall and passed the test with flying colors. Four Wolverines reached double figures but those four were the only players to score during the second half. It was Tim Hardaway Jr. and Glenn Robinson III that carried the bulk of the Michigan offense through the comeback effort as the duo made eight of Michigan’s 12 second half field goals and assisted on two others.

Michigan’s offense struggled to shoot the ball from the perimeter, connecting on just 18 percent of its three point attempts, but was able to scrap together 1.12 points per trip. Michigan continued to finish well around the basket, 61% on twos, despite Pittsburgh’s length and athleticism in the paint. Pitt entered the game as one of the best shot-blocking teams in the country but didn’t block a single Wolverine attempt.

The difference in this script was that Michigan was able to manufacture a win despite shooting poorly from three point range. Michigan didn’t continue to fire from long range, attempting just 34% of its shots from beyond the arc, rebounded 33 percent of its missed shots and got to the line often. The Wolverines overcame poor shooting in ways that they simply haven’t been able in past seasons.

Defensively, Michigan hit some snags. Pittsburgh hit 5-of-12 threes in the first half and gave Michigan fits with the high pick-and-roll. In the second half, John Beilein countered with the 1-3-1 zone and it was enough to change the complexion of the game. Michigan’s 1-3-1 has been stashed away in some back closet of John Beilein’s brain but apparently it’s still being practiced. It was also more effective than we’ve seen in recent seasons because of the length and athleticism on the wings. With Nik Stauskas (6-6) at the top, Tim Hardaway Jr. (6-6) and Glenn Robinson III (6-6) on the wings, Mitch McGary (6-10) in the middle and Trey Burke running the baseline suddenly the zone becomes a turnover machine. Pittsburgh never looked comfortable against the zone and even when Michigan wasn’t forcing turnovers, it was getting deflections.

The zone was a game-changer but Michigan won this game with its defensive rebounding. The Wolverines grabbed over 81% of Pittsburgh’s missed shots – compare that to Pitt’s 46.2% offensive rebounding rate on the season entering Wednesday night’s game and you have the game story. Pitt’s offense, similar to Michigan State, is predicated on corralling those second chances and turning them into second chance points. Pitt scored just five second chance points, all in the first half.

Often times winning ugly is more important than winning pretty. There are plenty of teams across the country that can win on their best nights but being able to withstand another team’s best shot without playing a perfect game is what separates good teams from great teams. On Wednesday, Michigan proved that its new toys are legitimate threats. The Wolverines are a team that can battle around the basket, win the rebounding battle (on both ends) and defend — winning games without the three point shot.

That’s not to say there weren’t teaching moments in the tough win. Michigan’s ability to play two posts, even against a much bigger Pitt front line, is still just a work in progress as U-M leaned on two posts for little more than six minutes of clock time. Pittsburgh executed well down the stretch but Michigan’s free throw shooting held and kept the Panthers at bay. The two most impressive late free throws came from Robinson, who made a pair after missing two earlier in the half.

Next up is a Kansas State squad that squeaked past Delaware to move to 5-0 in Wednesday’s early game. The Wildcats have returning experience even though they have a new man in charge – former Illinois coach Bruce Weber.