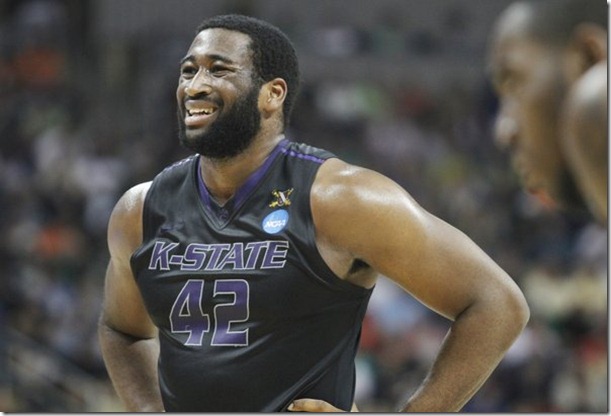 Michigan faces an undefeated Kansas State team that hasn’t quite been dominant, but steady enough under first year coach Bruce Weber. Fitting the mold of many of Weber’s late teams at Illinois, the Wildcats are much better defensively than offensively. The Wildcats held on against Delaware for a three point victory on Wednesday for their best win of the season.

The Kansas State defense is fairly strong across the board but truly excels in its ability to force turnovers. Wildcat opponents have coughed the ball up on 29% of their possessions in early season play, a top-15 mark nationally. The Wildcats like to push the tempo, averaging roughly five more possessions per game than Michigan, and will likely try to speed up Michigan to make the Wolverines uncomfortable. Kansas State does a good, but unspectacular, job of defending twos (43%) and threes (27%) while avoiding fouling (29% FTA/FGA). The Achilles’ heel of the Wildcat defense is on the glass, where opponents are rebounding 34% of their misses.

If Michigan is able to win the rebounding battle – on both ends of the floor – like it did against Pittsburgh, it should be able to control this game.

Weber is an equal opportunity distributor of minutes thus far in his tenure in Manhattan, giving exactly half of the available minutes to bench players. Eight different players have at least one start, despite playing just five games, and 11 players average between 13 and 24 minutes per game. Despite the large rotation, Weber still leans on four players a bit more than the rest.

Point guard Angel Rodriguez had a solid freshman year and has been a great setup man to start the season. He struggles to finish around the hoop (career sub-40% two point shooter) but has already hit 9-of-21 threes this season. He’ll be joined in the backcourt by 6-foot-4 senior Rodney McGruder. McGruder averaged nearly 16 points per game last season but the career 39% three point shooter is just 2-of-14 from long range to start this year. While McGruder has struggled to find his perimeter shot, Will Spradling has not. Spradling is on a the floor as a three point threat but he’s not a one trick pony, he handed out seven assists on Wednesday against Delaware as well.

6-foot-7, 270 pound big man Thomas Gipson anchors the middle. While Pittsburgh provided a challenge with vertical size, Gipson will challenge Michigan with his strength. He’s a rebounding horse on both backboards and is drawing almost 9 fouls per game. He’s not a great finisher or free throw shooter but he’s simply hard to move from around the basket.

The next tier of Kansas State players is a bit more difficult to decipher. Shane Southwell, Martavious Irving, Nino Williams all play fairly equal minutes in the backcourt. The trio don’t use many possessions but are fairly efficient when they do look to score. Irving and Southwell in particular have the ability to step out and hit open threes. The Wildcat backcourt is littered with pickpockets as Spralding, Rodriguez and 6-foot-3 Omari Lawrence all have impressive steal numbers in early season play.

In the frontcourt, Weber calls on Jordan Henriquez, Adrian Diaz and D.J. Johnson to provide depth. All three are strong rebounders but aren’t particularly efficient scorers but Henriquez and Johnson look to be solid shot blockers.

Kansas State probably isn’t as talented as Pittsburgh but is still an experienced team that has been to the NCAA tournament for the past three seasons. The Wildcats established a consistent recipe for success under Frank Martin and it doesn’t appear that Bruce Weber has changed the mix much. For the last six seasons, Kansas State has ranked in the top six nationally in offensive rebounding and the top-45 in defensive efficiency. For comparison’s sake, Michigan’s has been ranked in the top-50 defensively just once in the past five seasons. Early returns show that the Wildcats could sustain that success under Bruce Weber and Ken Pomeory has them ranked as the No. 17 team in the country.

Pomeroy’s computers project a narrow Michigan win by a final score of 65-62 in a 63 possession game, giving the Wolverines a 62% chance of victory. Vegas favors the Wolverines with a 4 point spread. Like Pittsburgh, this is a game that a top-five team should win but its not against an opponent that will simply roll over.

This & That: Michigan has never won the NIT Season Tip Off. The Wolverines are wearing “We On” warm-ups in New York City, the slogan stands for  ‘When Everyone Operates In-Sync’ and there’s even a “fuse box” in the locker room that allows each player to flip their switch on before every practice and game.