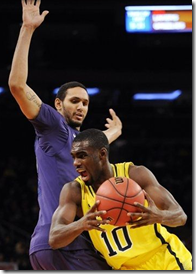 Michigan’s Thanksgiving trip to New York City was business as expect. The No. 4 ranked Wolverines toughed out a victory against Pittsburgh in the semifinal before overwhelming Kansas State in a blowout final game to earn their first preseason tournament title in over a decade.

If this week was meant to be a barometer for Michigan’s preseason hype, the Wolverines passed with flying colors. Michigan proved that it can win close games but also that it has more than enough talent to extend a lead against a good team that’s not quite good enough. Kansas State fell in the second category as the Wildcats battled Michigan close in the first half before allowing the Wolverines to open up a 21 point second half lead. Kansas State kept the game close but never led and there was little question that Michigan controlled the game from the opening tip to the last whistle.

Michigan has played well as a team this season but Tim Hardaway Jr. has been the individual star. The 6-foot-6 junior was named the tournament’s most outstanding player after scoring 23 points (on 10-of-15 shooting) and grabbing seven rebounds in the final. Hardaway continued to attack the basket aggressively and is now 24 of 34 (71%) on two point field goals through five games. Perhaps the most important news of the day was that Hardaway passed his concussion test after the game and should be good to go.

The last several games continue to prove that this Michigan team can win games in ways that John Beilein’s previous teams simply couldn’t. The Wolverines attempted just 21% of their field goals from three point range and were lethal inside the arc, converting on 24 of 44 (57%) two point field goals. Michigan’s inside attack extended to the offensive glass where the Wolverines grabbed 36 percent of their misses for 10 second chance points. This was the second consecutive game in which we saw Michigan out-rebound an opponent renowned for its rebounding ability – on both ends of the floor.

Michigan seemed to have to work for everything in the first half, wrestling its way to 29 points on 27 possessions. The offense never found a groove with Burke and Morgan sidelined due to foul trouble. Tim Hardaway Jr. carried the team with his middle game and U-M was able to keep Kansas State at arm’s length, but in the second half Michigan was able to push the tempo and really break the game open. Michigan’s offense is at its absolute best when Hardaway or Burke are pushing the ball off of a clean rebound or outlet pass. The pressure of Morgan running the middle, athletes like Robinson or Hardaway on the wings and even a shooter like Stauskas drifting to the corner with Burke pushing the tempo is just tough to defend. It took just over eight minutes for Michigan to extend a five point halftime lead to 18 and the game got out of hand quickly once Michigan found a groove.

Wolverine opponents continued to shoot the ball poorly against Michigan’s defense as Kansas State managed just a 40 percent eFG%, connecting on 43% of its twos and 22% of its threes. Michigan’s opponents are now shooting just 40% from inside the arc on the season — almost certainly a byproduct of increased size and athleticism in the Michigan frontcourt. That poor two point shooting combined with Michigan’s dominating defensive rebounding has been a recipe for success on that end of the floor. Kansas State still had 18 second chance points but only rebounded 27% of its misses, well below its season average of 49%. The Wolverines didn’t force many turnovers once again but by simply contesting shots and taking care of business on the glass, they are more than capable of slowing down most offenses.

Michigan has only played five games but this is a good team. They are deep, talented and versatile and there are few, if any, red flags to be worried about early in the season. I’d be the first to admit I was skeptical about Michigan’s top-five preseason ranking but the upgrade over last season’s squad is clear and there’s enough talent on Michigan’s roster to play with any team in the country. Next up is a North Carolina State team that might not quite be as good, or consistent, as many expected but is still plenty talented to give Michigan problems. The Wolverines host the Wolfpack on Tuesday evening at the Crisler Center.