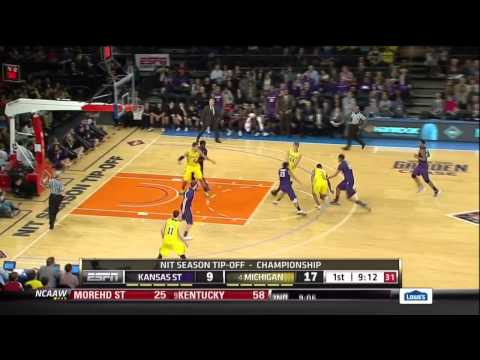 1. Tim Hardaway Jr. carries Wolverines in the first half

It’s hard to identify a college basketball player who’s had a more eye-opening start to the basketball season than Tim Hardaway Jr. With 23 points and seven rebounds, the talented wing was the reason Michigan won the game — and he was also what kept them during an offensively-challenged first half. When the Wolverines couldn’t get anything going on offense in the first half, they looked to Hardaway to bail them out. It worked. Hardaway has shown off a vast array of moves to get open looks, and what this first-half sequence shows more than anything is the newfound versatility of his game. He’s stepping into his looks on two-pointers, displaying unbelievable touch on floaters and an ability to will the ball into the hoop in the post. What may be most impressive to me about this sequence is the fact that Hardaway seems totally unaffected by contact — in fact, he seems to be looking for it. His aggressive play has been a major reason Michigan has seen such early-season success, and it was the reason they were able to hold onto a slim lead in the first half.

This sequence is a bit of a misnomer, considering that Michigan rebounded the ball very well overall and was great in the second half. For the game, Michigan only allowed Kansas State to rebound 27 percent of its misses — well below the Wildcats’ season average of 49 percent. Despite those overall impressive numbers, Kansas State did have 18 second-chance points, and those offensive rebounds in the first half were a big reason that Kansas State was able to hang around with Michigan for so long. These weren’t long rebounds — most of them came in a fight under the basket. There were a couple times when it looked like Michigan was a little tentative on the boards, evidenced by the first play in this sequence. But most of these plays were just one player getting the better of another underneath the basket. Give Kansas State credit: Kansas State is a very good rebounding team, with an offensive rebounding percentage that ranks sixth in the country. These were just a few rebounds that got away from Michigan but also an example of what Michigan was able to correct in the second half.

3. Jordan Morgan and Trey Burke each pick up two fouls in the first half

Friday’s game provided a familiar sight to Wolverine fans — Jordan Morgan picking up two quick fouls. While Morgan has done an excellent job the past two seasons of improving greatly in this area, and that should be noted, sometimes old habits die hard. The first foul came while he was hedging on a screen and he went for the steal. Hindsight is 20-20, and even though Morgan probably thought he could poke the ball free, it seemed like a silly foul. His second foul came on a dubious blocking call in which is looked like Morgan had his feet set and took a good charge. But the fact is, Michigan’s big men are regularly in charge/block situations, and these calls can decide whether a Wolverine post player plays 30 minutes or 13. The other starter in foul trouble was not familiar to Michigan fans — Trey Burke usually does a great job of staying clean. You can’t really complain about how the point guard picked up these two early calls as they looked like good hustle plays — though he probably should have kept his hands out of the scrum for the rebound on his first foul. These two starters getting in foul trouble early was a bit of a blessing in disguise: They opened up playing time for Mitch McGary and especially Jon Horford, who contributed significantly to the game in 17 minutes (six points, three rebounds, two assists). Spike Albrecht saw the court as well during Burke’s absence and held his own while leading the team.

Michigan opened the second half with a 29-24 lead. In the first half, the Wolverine offense in the half court looked strained and inefficient, but their defense was excellent. Michigan came out of the tunnel in the second half and immediately went on a 14-3 run that ballooned its lead to 16 points. The catalyst for this run? The fast break points Michigan got off of playing good defense and rebounding the ball. The first six Wolverine points scored in this sequence were scored on the run, and they immediately put pressure on Kansas State. Matt Vogrich didn’t see a whole lot of time in this game, but he did an excellent job in these two plays of getting the ball where it neded to be, when it needed to be there on the break. Those plays call for quick decisions, and his pass to Burke on the first play of this sequence between two Kansas State defenders was a thing of beauty. Michigan’s speed on the perimeter with Tim Hardaway Jr. and Trey Burke makes the Wolverine running attack particularly tough to stop. These quick six points allowed Michigan to settle into a more methodical pace and gave them the boost they needed to finally get their offense going the rest of the game. The Wolverines didn’t let up after this initial run in the second half, and they kept the Wildcats at bay until the final whistle.

5. Michigan keep the game out of reach with late 3-pointers

Friday’s victory wasn’t about the 3-pointers — only 21 percent of Michigan’s field goal attempts came from downtown. However, these late threes were crucial to maintaining Michigan’s lead whenever it seemed like Kansas State was mounting a comeback. Before Nik Stauskas’ 3-pointer at the seven-minute mark, the Wildcats had gone on a 7-0 run to pull the game to within 14 points. Stauskas was able to keep them at a safe distance by facing up and knocking down a hotly contested perimeter jumper. When Kansas State came back with a layup on the other end, Tim Hardaway Jr. made an even more demoralizing 3-pointer, thanks to penetration by Trey Burke. That make stretched the Michigan lead back to 18 with six and a half minutes left and effectively put an end to any hope the Wildcats may have held of a comeback. For good measure, Spike Albrecht stepped up and hit shot from long range at the end of the shot clock. Michigan just has so many weapons, and they were all on display on Friday.