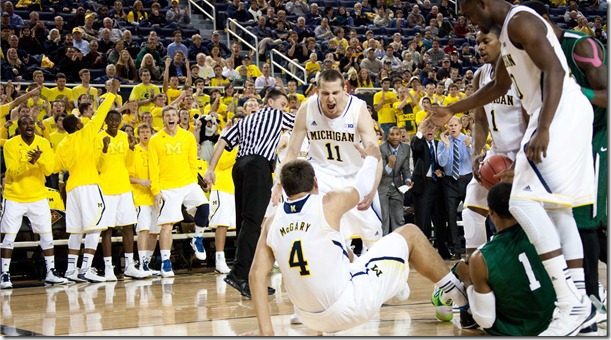 It’s too early to draw any real conclusions after five games, but it’s safe enough to start to observe a few trends. Michigan has looked very good, good enough to move its Ken Pomeroy rating up from 12th to 6th. The Wolverines rank 4th in offensive efficiency and 15th in defensive efficiency thus far and have impressed against both mid-major and high-major competition alike. Here’s a look at five statistical observations, both on a team and individual level, through five games.

Michigan’s upgraded talent, size and athleticism inside (and even on the wings) has been well documented. The question was whether a John Beilein-led team could begin to excel in areas where his previous teams simply haven’t. Through the first couple weeks of the season, it appears that Michigan is ready to adapt.

Michigan is the third best defensive rebounding team in the country, grabbing 81.1% of its opponents’ missed shots. The Wolverines are also doing a great job defending twos, holding opponents to 40.1% shooting inside the arc, but most importantly while avoiding foul trouble. Michigan’s free throw rate (FTA/FGA) allowed is a NCAA-best 16.8%.

Those numbers are especially impressive given that Michigan has played Pittsburgh and Kansas State. Pittsburgh is the nation’s fifth best 2-point shooting team and has rebounded over 40 percent of its misses against every team other than Michigan, when it only grabbed 18 percent. Kansas State isn’t a great shooting team but is the nation’s sixth best offensive rebounding team, grabbing over 40 percent of its misses against five other foes before just 27 percent against Michigan.

The Wolverines aren’t just beating up on the mid- and low-majors of the world (although they did that too), they’ve been able to impose their will against larger, more athletic and physical, teams.

Robinson is tied with Hardaway for playing the second most minutes on the roster and is averaging 12 points and eight rebounds per game early on. Using just 19% of Michigan’s posesssions, he’s scoring his buckets rather efficiently. When watching him in person, his offensive game appears almost effortless and he doesn’t seem to need the ball in his hands at all times to make plays.

Using early numbers from hoop-math.com, we can see some interesting patterns developing.

Glenn Robinson’s offense around the basket tends to be created by others and all of his three point makes have been off the catch. Conversely, the majority of his two point jump shots have come off of the bounce.

The numbers make sense. Robinson is a great cutter and creates opportunistic offense. His finishing ability has already allowed him to create a number of backdoor cuts and even buckets off of out of bounds plays. He’s been selective with the three point shot, only taking the best shots that come off of his teammates’ passes.

In isolation situations, Robinson hasn’t appeared to be quite comfortable enough putting the ball on the floor and getting all the way to the rim. The numbers show that he’s settling for mid-range jumpers when left in isolation situations. The Michigan freshmen is shooting the ball well across the board but it’s worth watching whether he becomes more comfortable slashing to the basket off of the dribble going forward.

Taking Ken Pomeroy’s oath into account, Nik Stauskas’s start to the season has still been ridiculous. Stauskas has an offensive rating of 157.5 (6th nationally) and the second best true shooting percentage (shooting with free throw production included) in the country at 82.7%.

Stauskas obviously won’t keep up his torrid shooting production but it’s extraordinarily impressive even for just a five game stretch. His offensive skill set is so versatile – he’s not just shooting open jumpers – that it’s exciting to think about what he’ll be able to accomplish as his game progresses.

Stauskas was named Big Ten Freshman of the Week after his strong performance in New York City and is likely to see his workload increase as the season wears on. It was interesting to hear John Beilein discuss running a “special” or set play for Stauskas in the second half against Kansas State when the Wildcats had trimmed the lead. That’s a lot of trust for a player in just his fifth collegiate game.

Using Ken Pomeroy’s projections, Michigan’s chances of running the table with an undefeated non-conference slate are up to 53%. If Michigan beats North Carolina State those figures would climb to 64%.

Part of that is because Michigan has impressed early on but the Wolverines’ non-conference slate has also disappointed somewhat. West Virginia is is now 1-3 with losses to Gonzaga, Davidson and Oklahoma. Arkansas lost to Arizona State and Wisconsin in Las Vegas and has tough games remaining against Syracuse and Oklahoma before traveling to Ann Arbor. North Carolina State lost to Oklahoma State, by 20, and was nearly upset by by UNC-Asheville. That slow start removes some of the luster from Michigan’s marquee Big Ten-ACC Challenge match-up on Tuesday.

Michigan’s non-conference schedule will hold up – three neutral court games, five major conference opponents and a road game – but is unlikely to be regarded as an elite schedule nationally when all is said and done.

Michigan isn’t going to be mistaken as a completely uptempo team anytime soon. The Wolverines are still averaging 62.4 possessions per game this season, 326th in the country. But that doesn’t mean you won’t continue to hear opposing coaches praise Michigan’s transition game.

The transition game has stemmed more from defensive rebounding than creating turnovers. Michigan has forced turnovers on just 14.3% of opponents’ possessions – the worst forced turnover rate among high-major programs this season. Using data from Hoop-Math.com, 15% of Michigan’s initial shots on offensive possessions come within the first 10 seconds of the shotclock after a rebound. Michigan’s effective field goal percentage in those situations is a stellar 62%.

There have been some signs of struggle in the half court offense and those numbers are also relevant when breaking down Michigan’s offense. 47% of Michigan’s offensive possessions come after an opponent made shot and between 11 and 35 seconds into the shotclock. The Wolverines have a still productive but noticeably lower effective field goal percentage of 51% in those situations.