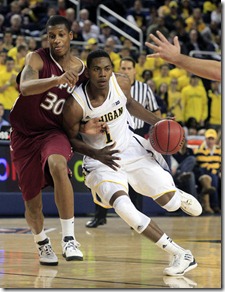 NC State’s blowout loss to Oklahoma State and narrow win over UNC-Asheville took some of the luster off of what was Michigan’s marquee non-conference home game, but tonight’s game is still worthy of plenty attention. The Wolfpack won’t be the best team Michigan plays all year, but will easily be one of the most talented.

The problem for head coach Mark Gottfried is getting all of that talent on the same page night in and night out. That’s the reason last year’s NC State team lost six of nine games in the middle of ACC play before getting hot late in the season and marching to the Sweet 16. This NC State team is still searching for that consistency with some dicey play to open the season but also has the talent to reach the Final Four if things break its way in March.

The NC State offense hummed along just fine against middling competition but hit a snag with an awful shooting night against Oklahoma State. Whether that was just an off-night or a real issue of struggling to score against above-average defensive teams remains to be seen. Through five games, the Wolfpack are shooting 56% inside the arc and 41% from long distance while also getting their fair share of free throw attempts (but converting just 61% of their freebies). This will be a good test for a Michigan defense that’s demonstrated great 2-point field goal defense early on. Unlike Michigan’s last two foes, NC State is a below average offensive rebounding team and is just average in the turnover department. The Wolfpack want to run, averaging over 69 possessions per game compared to Michigan’s average tempo of 62 possessions per game, opting for a wide open game rather than a grind-it-out Big Ten style contest.

Ranked 58th in Ken Pomeroy’s defensive efficiency, the Wolfpack are average on that end of the floor. Despite the length and athleticism on the roster, NC State doesn’t force many turnovers, block many shots and is average on the defensive glass. The Wolfpack do a solid job of contesting shots without fouling but have looked vulnerable in the last two contests. Surrendering 1.11 points per trip to Oklahoma State is one thing but allowing UNC-Asheville, who sits at just 1-5 and is ranked 174th nationally in offense, to put up an impressive 1.08 points per trip is a significant red flag. Keep a careful eye on whether Michigan’s slashers, notably Tim Hardaway Jr., continue to be effective when knifing into the paint and finishing in traffic.

The Wolfpack have plenty of NBA potential – C.J. Leslie (17),  Rodney Purvis (19), Lorenzo Brown (53) and Richard Howell (63) all rank in Draft Express’s top-100 – but they lack the depth seen in other top tier teams. NC State relies on a seven man rotation with even less depth after Monday’s news that big man Thomas de Thaey was leaving the program. Three bigs, four guards and wings – that’s it.

For the most part, those seven can play. All six NC State players that play over 20 minutes per game average double figures with Richard Howell (15 ppg) and sixth man TJ Warren (15 ppg) leading the way.

Lorenzo Brown and Rodney Purvis anchor the backcourt with 6-foot-6 senior Scott Wood serving as a glue guy and three point threat (40% career). Brown is highly regarded by scouts but his statistical profile is a bit quirky. Despite his 6-foot-4 frame, he’s struggled to finish around the basket making just 41% of his twos (46% career). He’s not incredibly disciplined with the ball but is an above average creator for his teammates and has a knack for getting to the free throw line. He’s more of a gambler on the defensive end and scouting reports cite his inability to maintain defensive intensity throughout whole possessions.

Purvis, a 6-foot-2 freshman, is a McDonald’s All-American wired to score the ball. He’s already hit 10-of-17 threes this season but has more than enough athleticism to attack the rim as well. Tabbed as the ACC Preseason Freshman of the Year, Purvis will be one of the most dynamic scoring guards that Michigan has to guard this season.

T.J. Warren versus Glenn Robinson III should provide a great match-up. Both freshmen were consensus top-30 recruits and serve in sort of combo-forward roles for their respective teams. Warren is the bigger player, at 6-foot-8 233 pounds to Robinson’s 6-foot-6 210 pounds, but the match-up should still be intriguing. Warren does most of his damage inside the arc, where he’s converted on 29-of-41 twos, that’s a sizzling 71 percent good enough to rival Tim Hardaway Jr.’s early strong start. Despite his large frame, Warren is more of a scorer than rebounder or defender at this juncture. If all else fails, fouling Warren might not be the worst strategy as he’s just 7-of-18 from the stripe this season.

C.J. Leslie and Richard Howell anchor the middle for the Wolfpack. Both regarded as potential NBA prospects, Michigan’s front line will have its hands full. Howell (6-foot-8, 257 lbs) is a force in the middle and a game changing rebounder. He’s converted inside this year, making 72% of his twos, but is a weak free throw shooter at just 59%. Leslie is a potential lottery pick and a prototypical NBA four at 6-foot-9, 198 pounds with a 7-foot-2 wingspan and great athleticism. He’s a good rebounder and converts about 53% of his inside baskets while also getting to the line often.

The problem for the Wolfpack is that beyond Leslie and Howell, there’s no post depth. The inside duo fouled out in NC State’s blowout loss to Oklahoma State combining to pick up 10 fouls in just 33 minutes combined. It will be critical for Michigan to attack inside and attempt to draw fouls on NC State’s big men early and often. Jordan Vandenberg is the only other big man option off the bench but the 7-foot-1 junior has played just 19 minutes total this season after taking a medical redshirt last season.

NC State will provide an entirely different test than Michigan faced in New York City. Those teams were physical and disciplined groups that excelled on the glass while NC State is the sort of team that wants to out-talent and out-athlete the opposition. There are a bunch of players on the Wolfpack roster capable of making individual plays and they will test Michigan’s defense across the board in ways that it hasn’t been to date. Pittsburgh might have been a more coherent team but lacked the one-on-one ability – both in the post and from the perimeter – to break down opponents.

Pomeroy likes Michigan by a fairly wide margin, giving Michigan an 83% chance of victory projecting a 74-63 final score. Vegas also likes Michigan, by a seven point margin, and this should be another difficult, but passable test for the Wolverines.

This & That: Michigan will raise its Big Ten Championship banner before the game. TJ Warren and Mitch McGary are former teammates from Brewster Academy. Michigan students will get maize and blue tinted sunglasses for tonight’s game. After losing the first 10 Big Ten-ACC Challenges, the Big Ten has won the last three. Tonight’s other Big Ten-ACC Challenge match-ups include North Carolina at Indiana, Maryland at Northwestern, Minnesota at Florida State, Iowa at Virginia Tech and Nebraska at Wake Forest. Ken Pomeroy’s robots think the Big Ten is most likely to win seven or eight games in this year’s challenge