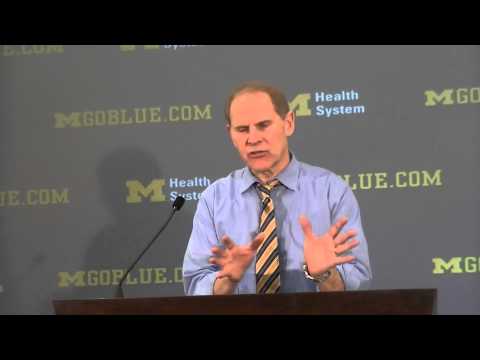 John Beilein spoke to the media after his team’s victory against NC State at the Crisler Center on Tuesday. Beilein talked about Michigan doing its part in the Big Ten-ACC Challenge, the emergence of Nik Stauskas, Trey Burke’s complete performance and much more. You can watch the full press conference using the embedded media player below or read notes and quotes after the jump.


Opening statement: “We played a very, very talented team today. I just said on my radio show, it’s just like our Arkansas game last year — getting used to that quickness, and that talent, I don’t think we ever got used to it. We gave up 57 percent (shooting for NC State). They’re just so quick to the rim. Their fast break, they run it right down your throat, so we hadn’t seen that and I know we’ll grow from it. Not happy about the 57 percent, the 72 points, but extremely happy to get a win over a high-quality team that will have a good year.”