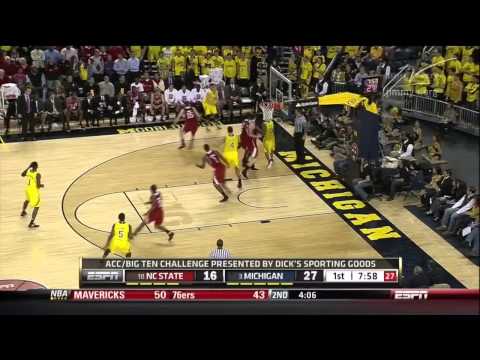 1) Nik Stauskas dominates the first half

During his best performance of his young college career — by far — Nik Stauskas showed the Wolverine faithful his full offensive repertoire. The freshman finished with 20 points for the game, and a sizeable portion of that success came from beyond the arc. With Trey Burke’s scoring limited in the first half, Stauskas picked up the offensive slack admirably. As evidenced by this first-half sequence, the young Canuck possesses a hair-trigger release on his jumpshot that allows him to get it off in nearly any situation — in fact, Stauskas said after the game that he feels more comfortable shooting with a man in his face. However, it should be noted that whatever small separation he was able to get from defenders on the perimeter likely came as a result of a couple of nifty drives to the basket in the first half. One was the play that got him to the free throw line, another was a tough finish in traffic after an excellent crossover. If he can continue to set opponents on their heels early in games, Stauskas will get plenty of looks from beyond the arc. On Tuesday, the Canadian showed he has plenty of confidence and almost no hesitation, which is a big plus for the Wolverines.

While Tuesday’s game was very encouraging in many ways for Michigan, the Wolverines suffered some lapses that ended up keeping NC State in the contest. One of those lapses extended for about a minute of game time late in the first half — Michigan allowed the Wolfpack to crawl back from down twelve and on the edge of a blowout to being down just seven with a chance to close the gap before halftime. This sequence illustrates one aspect of NC State’s offense that Michigan didn’t have an answer for: tough post play. Other than Scott Wood’s 3-pointer, both of NC State’s baskets in this short run came in the painted area, one off of an offensive rebound. On the first play, Richard Howell gets the one-on-one matchup he wants against Mitch McGary and takes him off the dribble. On the other, it’s Howell again, this time grabbing the rebound off a Wolfpack miss and finishing a tough layup in traffic. Michigan struggled to defend the interior all game but this run was also triggered by what felt like a pair of wasted offensive possessions. Fresh off of checking into the game, Eso Akunne didn’t hesitate to get a pair of shots up. He missed both and the empty possessions provided just a sliver of hope for NC State as Michigan slowed from its ridiculous first half offensive rate.

3) Trey Burke scores in bunches in the second half

Michigan’s All-American point guard played the entire first half without scoring a single point, opting instead to facilitate for others and hand out nine assists. All of that changed in the second half. Trey Burke scored 18 points, all in the second frame, to finish with 18 points and 11 assists. Perhaps most impressively, Burke didn’t turn the ball over once. Burke got things going early in the second half and really dictated the offensive action for Michigan. His first points came when Lorenzo Brown went under a Jordan Morgan screen — if you are guarding Michigan I’m not sure how you can justify not hedging Burke hard on the pick-and-roll, let alone going under the screen entirely – and Burke filled it up from long range. From there, he was pretty much unstoppable. He created offense with defense, shown on his steal off an exchange by the Wolfpack at the top of the key followed by a slam in transition. He confounded the NC State defense by waiting impossibly long to make a decision on a floater in the post as McGary rolled to the basket off a screen. The myriad of ways Burke can put the ball in the basket when his game is on continues to astound. On the final play of the sequence, Burke gets the Crisler Center crowd going as he strips McDonald’s All-American point guard Tyler Lewis to trigger the break and leaves the ball for McGary on the fast break, who slams it home.

One thing John Beilein made sure to mention during his post-game press conference was the fact that he didn’t like that his defense gave up 57 percent shooting for NC State and 72 points. Michigan defense struggled against the Wolfpack all night — it was just masked for most of the game by the Wolverines’ prolific offense. When Michigan’s offense stagnated, however, its inability to defend some of NC State’s star power reared its ugly head. This was never more apparent than during the last five minutes of the game, when NC State went on a run that almost cost Michigan the win. It seemed as though Michigan was its own worst enemy on offense during this stretch, easing up on the aggressiveness and playing not to lose. Many possessions ended in bad shots taken at the end of the shot clock – including some desperation looks by Tim Hardaway Jr. After not turning the ball over once in the last 25 minutes of play to that point, Michigan racked up two of its six turnovers in a matter of minutes. The Wolverine offense just seemed to tighten up; whether it was hesitating to shoot or bobbling passes around the basket. This stretch was troubling because Michigan has to be able to rely on its defense when its offense isn’t feeling it — particularly if the Wolverines are to be an elite team. Their defense will improve as the season goes on and the freshmen get more experience, but for now they have to keep their foot on the gas on offense for 40 minutes.

In the midst of the hysteria surrounding Trey Burke’s virtuoso performance and Nik Stauskas’s coming-out party, Tim Hardaway Jr. had a quiet but effective 16 points. None of his baskets were bigger than the one he made on this drive with about a minute and a half left in the game. At this point, NC State had cut what was once a 15-point lead to just five, and the Wolverines were on their heels. This is exactly the kind of situation when teams rely on their veterans to come through. Burke hands Hardaway the ball as Hardaway is curling over the top of the key. Hardaway keeps his momentum going as he receives the ball. What’s key on this play is that Hardaway’s defender, Lorenzo Brown, switches on the screen from Mitch McGary, leaving CJ Leslie on Hardaway. Hardaway recognizes the mismatch and uses a hesitation move to create all the separation he needs from the big man in order to finish the play. This pushed the lead back out to seven and was a big reason Michigan was shooting free throws with a 5-point lead at the end of the game, rather than clinging to a three point lead. Coming out of a timeout, this was a great job by John Beilein to get the ball into Tim Hardaway Jr.’s hands and let him make a play in a high ball screen situation where he’s been comfortable throughout his career.